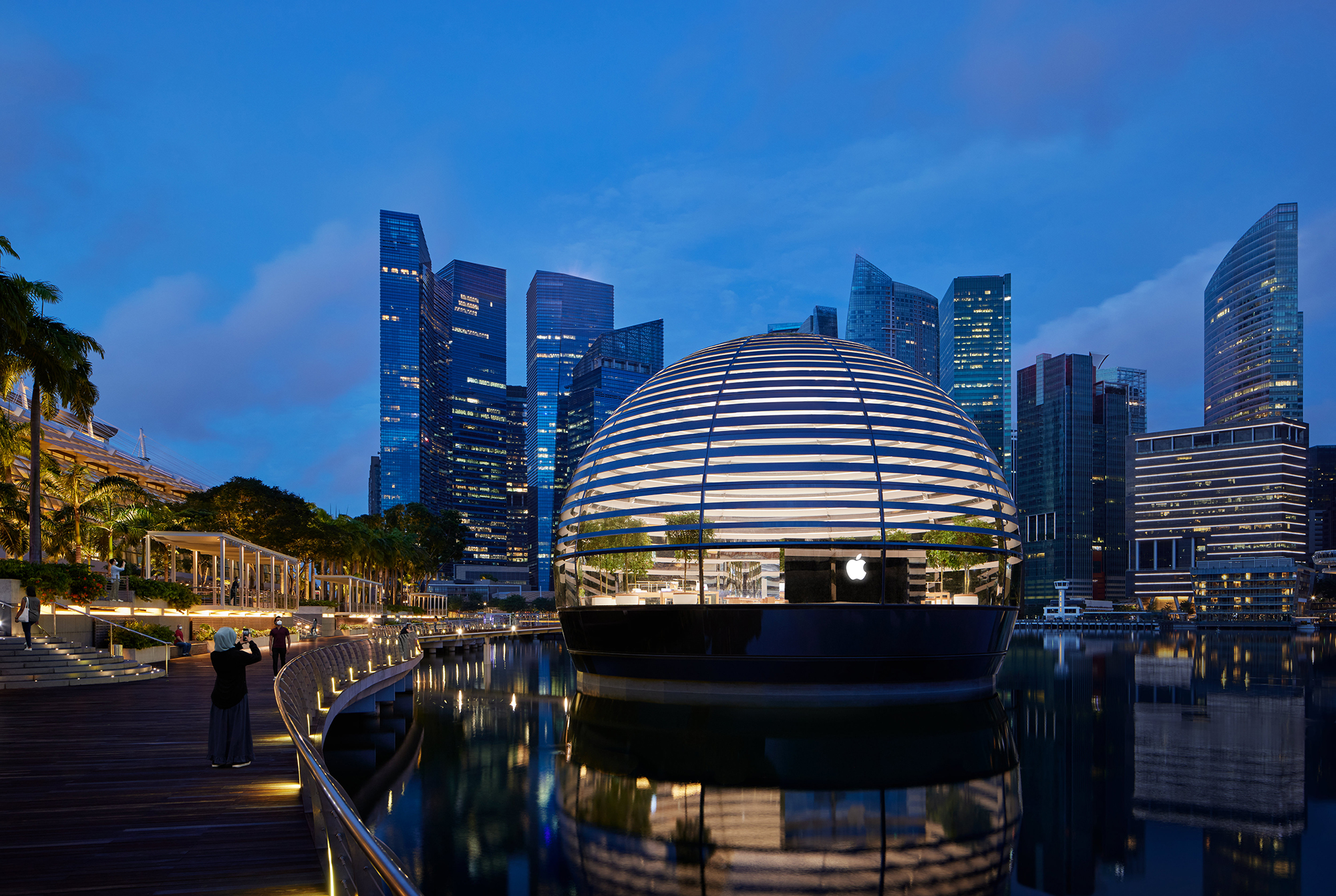 NEWS: 09.10.20 – The newest Apple store in the world opens today by the water in a bay in the central business district of an island state in Southeast Asia.

Just when the people of Singapore thought it was safe to go back into the water, a floating bullet appeared in the water of Marina Bay. The structure – the new Apple Marina Bay Sands that opened its doors to customers and visitors today in the midst of a global pandemic (with required masks and guidelines for social distancing in place in the store) – has been branded by Cupertino, California-based company as its hitherto most ambitious retail project. 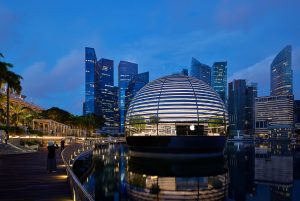 Apple Marina Bay Sands in Singapore looks like a floating sphere, and is Cupertino, the California-based company’s first store located on the water. (Photo: Apple, Inc.)

Apple officially announced the new store on Monday in a press release on the company’s website:

“Apple today previewed Apple Marina Bay Sands, the first Apple Store to sit directly on the water. Appearing as a sphere floating on the iridescent Marina Bay, the store introduces a new and captivating retail experience in one of the most iconic locations in Singapore. … As Apple’s third store in Singapore, the new store creates an unforgettable place for customers. ”

Visitors to the store will encounter how massive the sphere is, where they will be able to explore curated Apple products and accessories, receive personal technical support from Apple Geniuses, or interact with the nearly 150 Apple team members who speak a total of 23 different languages. “Today at Apple” sessions will be held in The Forum, which will serve as the stage – centered around a video wall – with Singapore’s artists, musicians and creators.

In addition, entrepreneurs and developers interested in training and advice can meet Apple team members in Apple’s very first underwater room, located on the lower level of the store.

In its press release, the company describes the sphere as a first of its kind, a dome structure in completely glass, which is completely self-supporting and consists of 114 pieces of glass that are connected by only 10 narrow vertical embers. An oculus, inspired by the Pantheon in Rome according to Apple, located at the top of the dome, provides a flood of light rays that move through space. The interior of the glass is lined with custom baffles, each uniquely shaped to counteract sun angles and provide a nocturnal light effect.

Completely surrounded by water, the new Apple Marina Bay Sands will offer both customers and visitors an uninterrupted 360-degree panoramic view of Singapore and its skyline. Trees along the interior of the dome also allow the city’s green gardens to flow seamlessly right into the shop.

Last month, iDrop News – which described Apple Marina Bay Sands as the coolest Apple Store ever – reported that if you thought Apple Fifth Avenue in New York City was exciting, with its giant towering glass cube, it’s old hat now that the company has only surpassed itself with a giant floating and glowing ball with the Apple logo.

According to Apple’s marketing materials, Apple Marina Bay Sands is referred to as the lantern on the bay. The new store location, the company’s 512th according to iDrop News, is a shiny ball resting on the water off the Bay of Singapore. During the day, the store’s glass panels reflect the high skyline of Downtown Core and the movement of the tickling water. At night, the ball glows with a mild warmth, evoking the design of traditional lanterns worn during Singapore’s Mid-Autumn Festival.

iDrop News reported that Apple also refers to the new store as a dramatic departure from the design of any Apple Store before it. And while unique, Apple Marina Bay Sands will still offer the signature experience and familiar store features that customers have come to expect from Apple elsewhere in Singapore.

Singapore already has the claim of fame for having the first fully solar-powered Apple Store that opened back in 2017 on Orchard Road. This was followed by Apple’s location in Jewel Changi Airport, which opened last year in the famous transport hub, where the world’s highest indoor waterfall can also be found.

The Straits Times, an English-language daily newspaper in the region, reported in August that Apple was about to open its third store in Singapore, although the retail and tourism sectors continued to be hit by the global pandemic.

The newspaper reported in early March last year that Apple would open two more stores in the region, one at Jewel Changi Airport (which has since opened in July 2019) and the other at Marina Bay Sands. Apple CEO Tim Cook, according to Straits Times, appeared for all, but confirmed the third store on his visit to Singapore in December 2019 (when Apple Marina Bay Sands had not yet been officially recognized by the company and was still being built), when he said the republic could use a third store like the one on Orchard Road that seemed to be full for him.

The Straits Times reported that the dome-like structure that sat on the water outside Marina Bay Sands where the store is located was previously occupied by the mega nightclub Avalon, from 2011 to 2016.

In a Business Insider report published at the same time as previewing the as yet unopened floating sphere, the website noted that Apple Marina Bay Sands was far from the first Apple store to have a creative design or attention-grabbing location. For example, the company unveiled a new Apple Store along the Chicago River, a popular tourist destination in Windy City, in October 2017. Similarly, in September 2011, Apple opened a two-story store in Hong Kong’s first shopping district. which has a spiral staircase in glass.

According to Apple, the company’s history in Singapore has stretched over more than 40 years, starting with the first corporate office in the residential area of ​​Ang Mo Kio, where the team in 1981 produced most of the circuit boards for Apple II computers. sent across the globe. Since then, the company has expanded its business and retail presence in the region and now supports over 55,000 jobs locally from across the Apple ecosystem.

“We could not have been happier to open the stunning Apple Marina Bay Sands in Singapore. Our passionate and talented team is ready to welcome this community to our new store and deliver the care and support that our customers around the world love, ”said Apple Senior Vice President of Retail + People, Deirdre O’Brien, in the company’s press release. .