Two days ago, Filipe Espósito from 9to5Mac reported that Apple seemed to be running out of Apple Watch Series 5 models in the various places where you can buy an Apple Watch. It seems we now know why. Yesterday, Apple announced that they will hold an Apple event on Tuesday, September 15 at. 10 Pacific / 1 Eastern. In a normal year, I would think this is an announcement about a new iPhone. From 2012 to 2019, Apple announced a new iPhone every September. But keep in mind that Apple announced over a month ago that this year would be different (probably because of COVID-1

So what will Apple announce next week if not a new iPhone? The tagline that Apple uses for next week’s event is “Time Flies.” As John Gruber of Daring Fireball speculates, the word “time” almost certainly indicates that Apple is ready to announce the next version of the Apple Watch. Apple Watch Series 5 was announced this time last year (and Apple Watch Series 4 the year before that), so Apple may now be on an annual update cycle for this product. There is also a rumor that Apple is close to releasing a new version of the iPad Air (last updated in March 2019), so it may also be part of next week’s event.

Due to COVID-19, this will not be a typical event where press members are in the audience and Apple executives are on stage. Instead, Apple will stream video of the event so everyone can watch it.

While we’re waiting for the next Apple Event, if you want a cheap thrill, use an iPad or iPhone to load the event page and tap the blue graphic to see an animated AR version of the graphic. 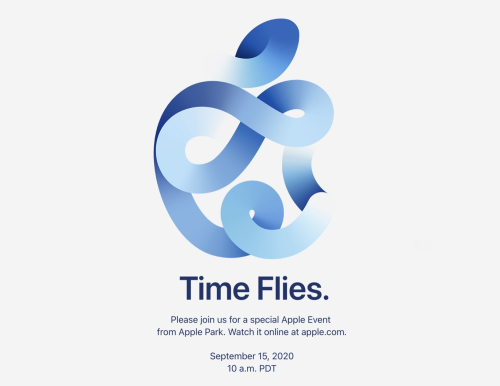