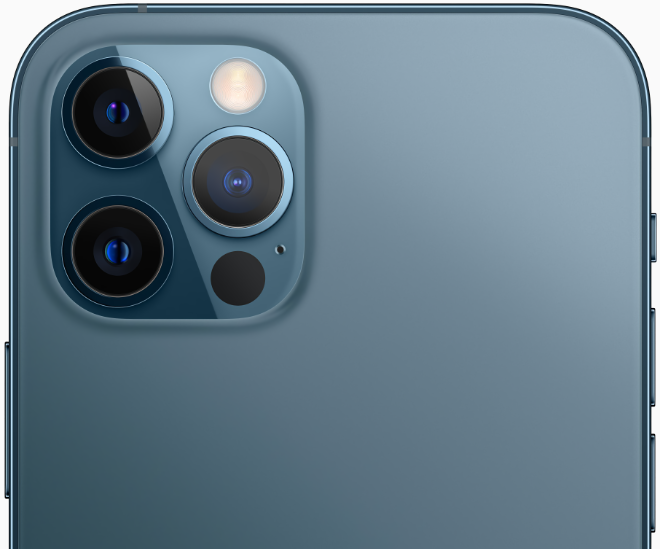 Apple on Tuesday unveiled the iPhone 12 Pro and iPhone 12 Pro Max, introducing a powerful 5G experience, advanced camera systems and technologies that push the boundaries of innovation for users who want the most out of the iPhone.

The Apple-designed A14 Bionic chip, the fastest chip in a smartphone, powers impressive computing photography features, including the all-new Apple ProRAW for more creative control in photos, enabling the first end-to-end Dolby Vision video experience, up to 60 photos per second. The newly created pro camera systems include an expansive Ultra Wide camera, an even longer-range telephoto camera on the iPhone 12 Pro Max, and new Wide cameras for capturing beautiful, professional-quality photos and video in bright, low-light environments. iPhone 12 Pro models also introduce a new LiDAR scanner that benefits the camera with faster autofocus in low light and introduction of portrait in night mode.

The optical image stabilization (OIS) on the iPhone 12 Pro now makes adjustments to the Wide camera 5000 times per second – five times faster than the iPhone 11 Pro. And it does a fantastic job of keeping images sharp and videos stable. But to stabilize the iPhone 12 Pro Max Wide camera, Apple had to come up with a completely different system. Apple developed a stabilizing solution that only moves the sensor, keeping it even more stable than before. It’s sensor-shift OIS, and it’s a game changer. Until now, sensor-shift stabilization was only on DSLR cameras. Now it’s available on Apple’s iPhone!

Apple’s iPhone 12 Pro piles improvements on the already formidable power of its camera system, adding features that will be appreciated by “serious” photographers – that is, the type who really like to mess with their photos after that. Of course, the upgrades will also be noticeable to us “shoot and forget” shooters.

The most tangible change is the redesign of two of the three lens systems on the rear camera unit. The Pro Max comes with a new, deeper telephoto camera: 65 mm equivalent instead of the 52 mm found on previous phones. This closer optical zoom will be appreciated by many; After all, 52 mm is still quite wide for portraits.

The improved wide-angle lens, which is common to all the new iPhone 12 models, has the lens composition simplified down to seven elements, which improves light transmission and gives the corresponding aperture of F / 1.6. 12 Pro Max gets a further upgrade in the form of a slightly larger sensor. In this scale, virtually all photos count, especially for the renewed night mode.

On the software side, the introduction of Apple ProRAW will be a gift for photographers who use the iPhone either as a primary or secondary camera … Being able to shoot to a RAW format (or RAW adjacent; we’ll learn more by hand) on testing) releases photographers who may have felt involved in iPhone’s standard image processing. There were ways to get around this before, but Apple has an advantage over third-party apps with its low access to the camera architecture, so this format will probably be the new standard.

This newfound elasticity at the image format level also allows iPhone professionals to take pictures in Dolby Vision, a rating standard commonly used in editing series after filming or commercials on a digital cinema camera. Shooting directly to it can be useful for people who plan to use the format but shoot with iPhones as B-cameras. If film photographer Emmanuel Lubezki approves, it’s good enough for pretty much everyone else on earth.

MacDailyNews Take: No other so-called “smartphones” can compete with Apple’s iPhone 12 Pro or, in particular, iPhone 12 Pro Max in still photography, much less videography (iPhone is in a different universe in video).