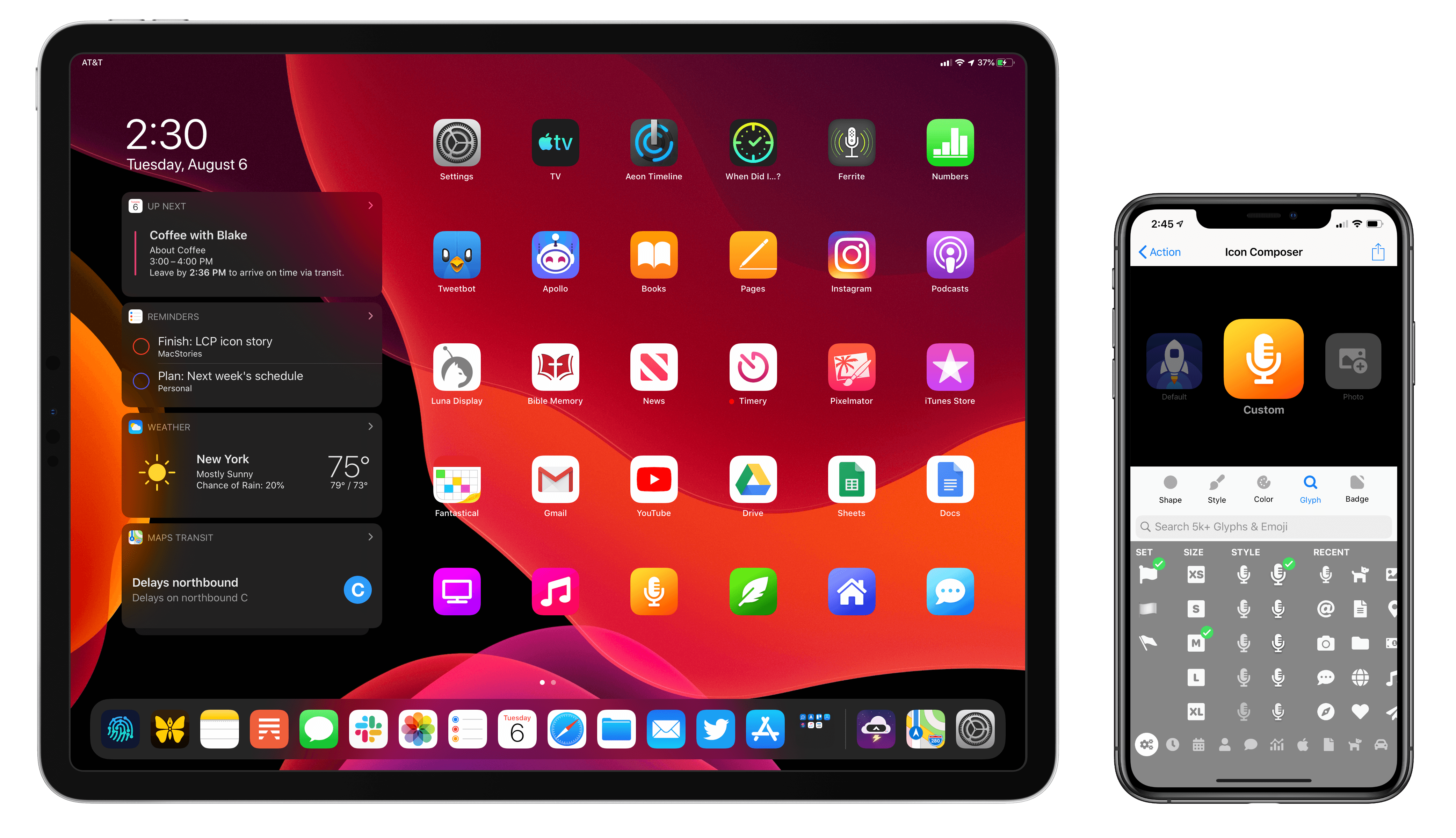 This fall, when iPadOS 13 is launched, it will bring an updated home screen containing attached widgets and a closer arrangement of apps. The changes aren't as revolutionary as iPad power users might have hoped when they heard whispers about a redesigned Home screen, but they're a start. While the addition of widgets is valuable in itself, in beta testing of iPadOS I have also discovered a lot of potential for the larger set of icons that the home screen can now contain – especially when combined with a new feature just added to Launch Center Pro.

Today, Launch Center Pro 3.1 starts around a major upgrade to the app's icon composer, providing numerous options for creating custom icons. While the use cases of this icon creation tool are great, I was intrigued by one specific opportunity: designing icons that can be exported as image files and used by the Apple Shortcuts app when adding shortcuts to the Home screen, since shortcuts allow customized images for Shortcuts on the Home screen . Combined with several key OS changes, and the Launch Center Pro icon creation tool, it is a better time than ever to add shortcuts to your iPad or iPhone home screen.

For years, the iPad screen has felt like it included a lot of wasted space, especially if you're using a 1

2.9-inch iPad Pro like me. Over large app icons with a significant distance between them has meant that you could only fit 20 apps on the Home screen. Now, in iPadOS 13, the number has grown by 50% up to 30 total apps – not counting the dock. For the first couple of months of using this new home screen, I left the bottom row of apps blank because I simply didn't need the extra space. While I keep some apps on my second home screen that I could have moved to the first one, I wouldn't do it because I prefer to keep only what's important on the first screen. Combined with quick access to my widgets, 30 apps were on screen at the same time more than I needed.

Then Launch Center Pro inspired me to get creative. I know some users keep shortcuts on their home screen, and I've done some myself lately, but it never lasted for three main reasons:

With the first edition remedied by iPadOS, the second was my only obstacle. I quickly realized that it was also less of a problem than it had been in certain use cases. Partly because in iOS 13, shortcuts on the home screen launch directly into the shortcuts app instead of displaying a white screen first as part of the web clip implementation. More than that, previous screen shortcuts from previous screen characters are further negated by changes to multitasking in iPadOS 13. In the past, I've used shortcuts on the home screen to launch in a particular view in a given app – a note, Ulysses sheet, or a other specific document. Although iOS 12 couldn't do this without problems, it didn't work as well as I wanted them as a document persistently paired with a second window – really, and launched not just a single document, but a workspace consisting of two apps paired in Split View. Fixed app spaces were introduced for iPad multitasking in iOS 11, but they were functionally castrated by the inability of an app to exist in more than one room at a time. So if I wanted Apple Notes paired with Safari in one place, I could only keep that space in step if I never used Notes or Safari with any other app in Split View – an unlikely scenario. But in iPadOS 13, thanks to multivindow support, the previous limitation is gone. Apps can have multiple windows spread across different spaces and Split View combinations.

Multiwindow, combined with fixed approm, makes the concept of working areas an exciting prospect. You can create regular app arrangements and specific views in these apps to match one aspect of your work. For example, in my spare time, I've slowly slipped into a creative writing project, which usually involves working in two Apple Notes windows, one containing a specific note and the other a specific Notes folder. This saved shared view can be started by a shortcut I created to start that note, which then brings the Notes folder with it because the note is in a fixed location.

Now this workspace concept goes a step further: once you have a shortcut that launches a specific workspace, you can add that shortcut to the home screen to quickly jump back to the layout you need for your task. That's what I've done with my creative writing workspace, and I've begun to consider opportunities for other workspaces to create.

From left to right, here's what my shortcuts on the home screen do:

Many of these would work well as part of the shortcut widget, especially now that the widget can be attached to the home screen of iPadOS 13. However, there are certain widget shortcuts I use on the iPhone that I don't want have on the iPad, and vice versa, but with sync enabled, shortcuts won't allow you to customize the widget per device.

also wonders why these shortcuts are mostly leisure-related. While I use multiple shortcuts each day to complete my work, the ones to be run through the stock sheet while working in apps like Ulysses or Photos so they wouldn't be as useful on the Home screen. When I assign shortcuts to the widget, or sharing sheets or home screen, I'm very concerned about choosing the right shortcuts for thoseright relationships.

Now I've talked a lot about shortcuts, but what does all this have to do with Launch Center Pro? Although I could do everything I mentioned above using shortcuts alone, if I did, I had to use the limited icon choices offered by shortcuts. And it wouldn't be as fun. Launch Center Pro allows you to customize your home screen icons with a ridiculous amount of glyph, color and style options.

Launch Center Pro's new icon composer can be reached by hitting the app's pencil icon in the upper-right corner, then changing an existing action or adding a new one and touching the Icon menu in the popup window. The icon you create here is applied to the action in the app you are changing, but it can also be exported to another app, such as Photos, so you can use the icon for things like shortcuts on the home screen. As I mentioned above, you can choose a custom image that you want to use as a shortcut icon when you add a shortcut to the Home screen from the shortcut app. So even if you create that icon in Launch Center Pro, when the icon is exported to Photos, the process of making a shortcut on the Home screen happens entirely with the Shortcut app – Launch Center Pro is not the middle man by any means.

The icon composer first presents options for creating either a custom icon or a photo. Although there are some nice customization options for photo icons, including changing the image's shape, frame, and tag, the full option is available for the & # 39; Custom & # 39; icon, and they include categories of shape, style, color, glyph, and brand.

Form. Icons can be designed in one of three shapes: standard rounded square, solid square, or circle. When you add to the Home screen, all icons must technically be rounded squares, so that the first two options are virtually identical. If you select a circle, it will only look good on the home screen if your background image is completely black or white, because the exported circle will be surrounded by a colored border to fit the standard home screen shape.

Style. A variety of style options allow your icon to use a single color, one of several gradations, different textures and more. It is even a style reminiscent of the earliest days of app icon design.

Color. Fifteen different colors can be selected from and assigned to either the background color or foreground of your icon.

Glyph. Here things get a little crazy. Launch Center Pro offers over 500,000 glyph and emoji options you can use for icons. For each glyph or emoji, you can resize to take up more or less space on your icon, and you can choose from 10 different style options to adjust things like outline, shadow, blur and more. But the real fun is the large amount of glyph choices, so you can find the perfect glyph for the icon you need. In my case, it meant discovering icons that perfectly fit what my shortcuts on the Home screen do, rather than having to settle for anything less than ideal – as I often have to do when, for example, browsing shortcuts to my own glyph options. As you browse the Launch Center Pro's large library of glyphs, you can navigate to specific categories that you can in the iOS & emoji keyboard by tapping the icons at the bottom of the screen – but fortunately, it's also a search option so that manual browsing is not is not necessary.

Badge. You may optionally mark a corner of your icon, or upper or lower edges, with a mark of any color and miniglyph you select. Glyph for a mark is especially useful to indicate what the given icon is meant to do. For example, if you created a photo style icon with a specific person, you can add a tag that indicates an action such as messages or call them.

Anytime you create an icon, you can press the share button in the upper right to either save your icon to Photos or export it to another app. If you choose anything other than the solid square shape, you will see options for exporting your icon on a white, black or transparent background.

It's impossible to say how many millions of different icon combinations can be created in Launch Center Pro, but here's a nice sampling.

iPadOS 13 may not introduce the kind of home screen redesign that some users are hoping for, but combining the extra app tracks it provides with Launch Center Pro and shortcuts will unlock some exciting new opportunities.

I have always appreciated the ability to have shortcuts on the home screen, but before using the Launch Center Pro icon composer, I was never completely satisfied with how these shortcuts were displayed. The options for customizing icons in the shortcuts app are limited, and I may be a bit picky when it comes to home screen aesthetics – so I was less likely to experiment with shortcut options at all. Launch Center Pro 3.1 was exactly what I needed to solve that problem. The app provides an impressive set of rich tools for precisely designing the icons that fit your home screen preferences, and inspires creativity in how shortcuts can make your home screen more powerful and personal.

Launch Center Pro is a free download on the App Store. Some items in the Icon Composer are free, while other items require that you either have an active subscription to the app or you can purchase full access to the Icon Composer with a one-time in-app purchase.