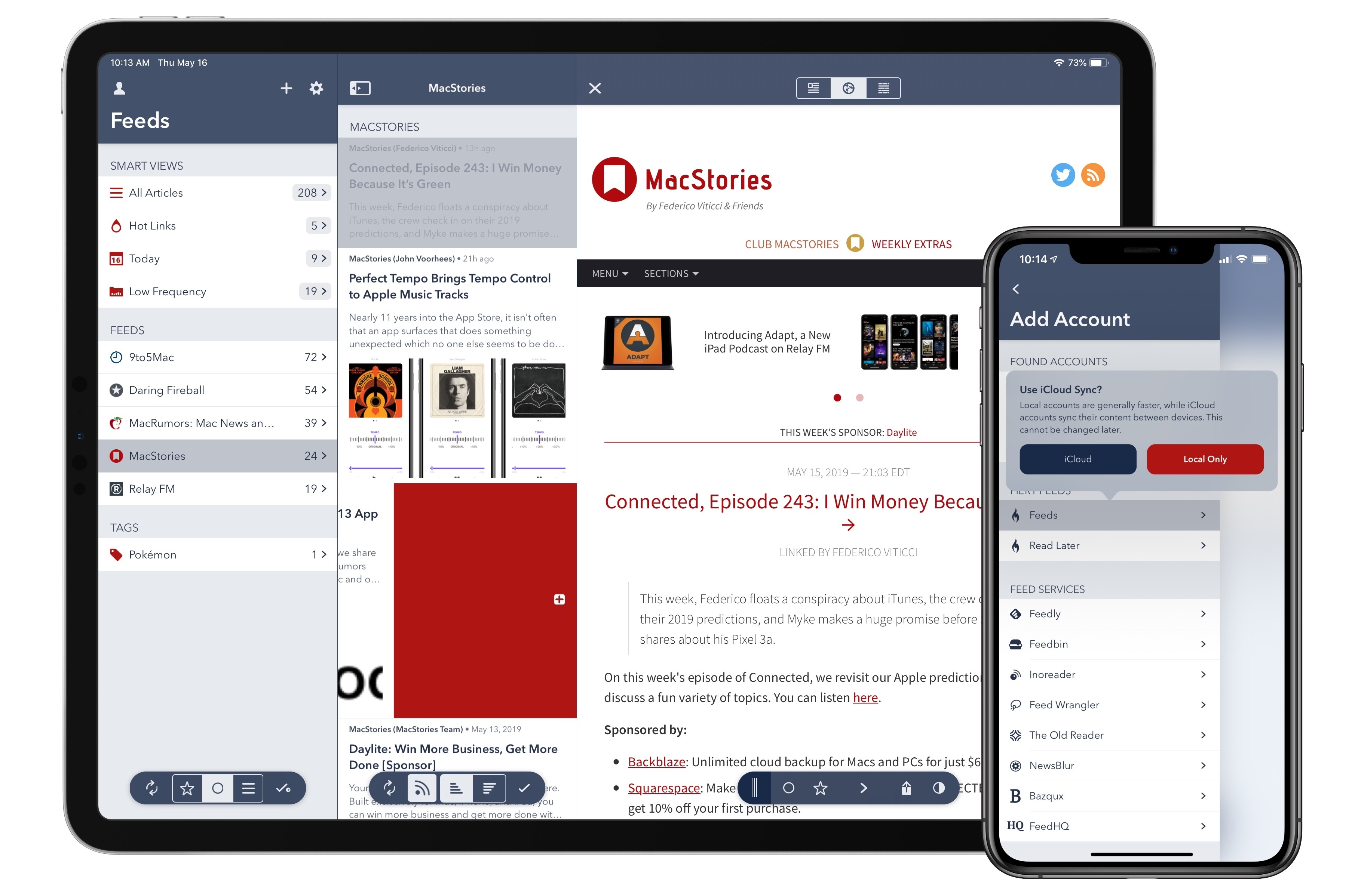 Fiery Feeds, the modern, flexible RSS client for iOS, was updated today with a host of new features that take the app to new heights: enable iCloud-based accounts for RSS and Read later so you don't need third-party partying services, adding a wood panel layout to the iPad, offering new, configurable navigation and much more. There is something for everyone, from users who can be new to RSS to veterans from Fiery Feeds who will appreciate the added power offered here.

Regarding integration with third-party content services, Fiery Feeds will always be good. However, a recent trend with RSS apps is that more and more are offering iCloud-based service, so a traditional third-party account is not required. In today's update, Fiery Feeds continues to support existing integrations with Feedly, Inoreader and Feedbin as well, but it adds the ability to use what the app calls a Fiery Feeds account.

A Fiery Feeds account can be configured for iCloud synchronization or local storage only, and once configured, you can add RSS feeds that work the way they do with other RSS services. Many users will be happy to continue using a third-party service and the freedom of mobility that this option provides, but the complaint to Fiery Feeds accounts is that they are very convenient to create and run with, including when installing Fiery Feeds on multiple devices . No matter how unpleasant an app-specific account may be for long-lasting RSS fans, for anyone new to RSS, the concept of iCloud synchronization of an apps data is only sensible. Also, if you use a Fiery Feeds account but later want to move to a separate client, the program makes it easy by offering OPML export options.

Popular later services like Pocket, Instapaper and Pinboard are all supported by the Fiery Feeds, but now you can also use a custom Fiery Feeds Read Later account. The principle is the same as with RSS accounts: By enabling a first-party option, the Fiery Feeds eliminates the complexity of registering for and configuring a third-party service.

After a Read Later account is created, you can add articles to it in two primary ways: it is a Read Subpart extension dedicated to the task, ideal for use in remote applications such as Safari or Twitter; Alternatively, from the Fiery Feeds, you can configure a custom swipe gesture that triggers Quick Share and make sure your Read Later account is the action related to Quick Share. So if you scroll through Twitter and find a link that you can save, the sub-archive can handle it for you, while if you browse feeds in the Fiery Feeds, a quick sweep of an article is about saving it for later.

Finally, in the realm of iCloud-powered improvements, Fiery Feeds now offers synchronization for all settings and accounts in the app. The previous option is especially important because today's update adds a wide variety of settings you can configure to really make your app your own. When I first started using the Fiery Feeds, I made many settings to customize the app to my preferences, so the possibility that those changes are synchronized across all the devices is an important addition. Account synchronization, for security purposes, does not bypass the need to re-enter third-party service credentials; However, it is especially nice when paired with the new Fiery Feeds account options, which do not require the additional step of logging in.

Many of the new iCloud features in Fiery Feeds are ideal for new users of the app, but version 2.2 presents many significant changes for existing users to enjoy as well. First, there is a new three-panel layout on the iPad. In both landscape and even portrait orientations, iPad can now display your mailing list, article list and an article on the screen at the same time.

Three-panel layouts were added to the system notes and mail programs in iOS 10, but since then, the model set by Apple has been adopted by surprisingly few apps. Reducing the need to constantly navigate between menus is always a good thing, and I am especially pleased. The Fiery Feeds new view is not only available on the largest iPad Pro, but all iPad sizes. Even for those times, you need to navigate menus, such as when using an iPhone, make today's update easier by supporting a sweep motion to go back.

It's much easier to interact with articles via actions. New version of Fiery Feeds. Initially, you can now adjust the horizontal sweep movement for both short and long swipes. On the app's settings screen, under Article List, you see a group of seven actions that can be assigned to each swipe, including the Quick Share action I mentioned earlier, which can be configured to, among other things, save an article in Read Later. Both the newly customizable gestures are limited to the left sweep, and the previous right swipe option has been removed to better enable the app-wide swipe movement to navigate back. However, the function hidden behind the right turn has been restored behind a new long menu menu.

Long-lasting an article in Fiery Feeds now presents a pop-up menu with options to star, tag (when supported by RSS service), or share an article, along with the ability to tag all articles over or under as read. On an iPad, where drag and drop is supported in the article list, you will press and hold and release the enable pop-up menu. However, if you never use drag and drop, you can increase speed slightly by disabling drag and drop from Fiery Feeds & # 39; settings, then a simple long press activates the new menu.

Tags. If you assume your RSS or later service supports the feature, articles can now be tagged in Fiery Feeds, giving new flexibility in organizing what you read – or want to read later. Although I usually do not use much in apps where they are available, I am especially concerned with codes in the Fiery Feeds – since it is not a traditional document-based app with a file structure, tags can be used mainly as folders. In apps that contain both folders and tags, I find the latter largely redundant, but with an app like Fiery Feeds I can think of codes having huge tools.

Stored reading drive. If you are used to reading longer articles, such as one of Federico's iOS reviews or story he will publish next week you will appreciate the Fiery Feeds new ability to save progress in articles. This doesn't sync across devices and in the test I haven't found it reliable after closing the app, but when you stay in the app that works through feeds, you can move back and forth between articles without losing the reading process.

One of the Fiery Feeds primary forces continues to reside in its powerful Smart Views, which Federico detailed in its review of the Fiery Feeds 2. Smart Views is both a sophisticated power user feature and a utility that simplifies RSS for the informal user. The theme for addressing two very different sets of users continues in version 2.2, where both RSS-pro and novice find meaningful new functionality.

Even though you've tried Fiery Feeds before, and it wasn't for you, this update is a perfect opportunity to give the app a fresh look. If you are like me, you will have time to customize a variety of settings to make the app look and function as you please, but the payout is easily worth the investment.

Fiery Feeds is a free download on the App Store, with a premium subscription required to unlock many of its power features.