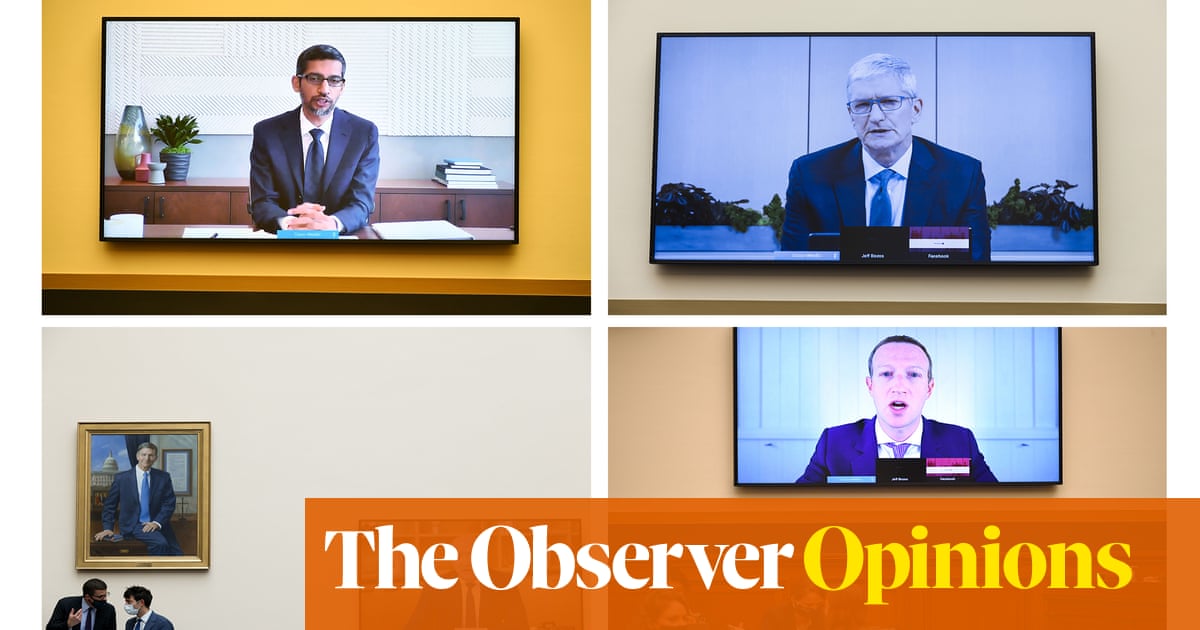 THEn Tuesday night a large (449 pages) pdf landed in my inbox. It is the majority report of the U.S. House Judiciary Committee’s subcommittee on antitrust, commercial, and administrative law, and it is ideal reading material by the bedside for just two classes of people: competition attorneys and newspaper columnists. But while unlikely to be a bestseller, the publication is still a milestone event because it marks the first coordinated (and properly resource-based) critical interrogation of a new group of irresponsible powers looming in our democracies: technology companies. The leading spirit was something that was said by the great Supreme Court Justice Louis Brandeis many months ago: “We must make our choice. We can have democracy or have wealth concentrated in the hands of a few, but we cannot have both. ”

1; Amazon, Apple, Facebook and Google. How Microsoft lost control is a mystery (to me anyway); maybe it’s because that company had its day in court a long time ago and survived to become the handmaiden of governments and organizations everywhere and therefore is part of the ruling establishment.

The inquiry that led to the report started in 2019 as an investigation of the state of competition online. It had three goals: “1) to document competition problems in digital markets; 2) examine whether dominant companies engage in anti-competitive behavior; and 3) assess whether existing antitrust laws, competition policies and current levels of enforcement are sufficient to address these issues. Roughly speaking, the conclusions are: there are really serious competition problems in digital markets; dominant companies is behaves in grossly competitive ways; existing laws need updating; and enforcement to date has been patchy and in many cases sadly inadequate.

The cynical answer to these findings is that we knew all that, so what’s new? Two answers: firstly, that we did not have evidence on such a massive and detailed scale, and to make reforms possible in a law-abiding democracy, you need evidence-based policy; and secondly, this is the first time that legislators in the jurisdiction that still has the greatest importance in the tech arena – the United States – have begun to take these things seriously.

The Republicans in the subcommittee are obsessed with only one thing: social media “censors” of “conservative” opinions

Another important thing about the report is that it signals the beginning of the end for a legal mindset that has weakened antitrust action in the United States for decades. This intellectual passivity can be traced to the late 1970s and especially to the publication of a landmark book, The Antitrust Paradox by Robert Bork, a prominent judge and legal scholar. The aim of his argument was that for many decades the US antitrust law had focused too much on ensuring competition in the markets instead of protecting consumers. Since consumers often had the benefits of corporate mergers that led to giant companies, the antitrust law should therefore focus on consumer welfare rather than ensuring competition. And of course, for “consumer welfare” read “lower prices”.

This philosophy was enthusiastically embraced by influential Chicago law school scholars and their colleagues in the economics department, including Milton Friedman, the high priest of neoliberal economics. And then comes the Internet, followed by the Internet and the rapid growth of companies like Google, which offers “free” services, and Amazon, which offers affordable online retail. Bork’s arguments were music to the ears of tech entrepreneurs who drove the power of network effects in winning markets, and yet, by Bork’s criterion, did nothing but good for consumers while becoming a monopoly in the process. Using old antitrust doctrines to such giant firms was, according to the new mindset, tantamount to punishing excellence.

Bork’s legacy – legislative and legal tolerance for the growth of digital monopolies – explains why technology companies have had such a free ride for decades. The House subcommittee’s investigation was the most tangible sign so far that the good times may come to an end. The intellectual and regulatory climate has changed.

But even if it is true, it is a long and rocky road ahead. The report, remember, is a “majority”: it only represents the views of the democratic majority in the subcommittee. Although the investigation originally began as a two-party, as things got crunchy, the pathologically polarized policy in the United States eventually came up in the committee room. This was actually evident during the TV barbecue of the CEOs of the four technology giants at the end of July. While Democrats in the subcommittee examined witnesses about their abuse of monopoly power, Republicans, one of them a flake of Cadbury proportions, were obsessed with only one thing: social media “censors” “conservative” (AKA right-wing) opinions. Not surprisingly, when it came to signing the report, all Republicans flocked.

What happens next, like everything else, depends on what happens on November 3rd. If Biden wins and the Democrats gain control of both the Senate and the House, the tech giants will have big problems on their hands, because they are dealing with legislators and regulators who know what they are doing. If Trump wins, well, they’ll just face a short ball of attention. For all I know, they may think it’s the better option – for them. Stay tuned: only 23 days left.

What I have read

Selling shares
On the Social Media Collective’s website, a very insightful critique of Niall Docherty of the film The social dilemma.

Truck with problems
What happens if there is no Brexit trade agreement? You can guess the answer, but Politico has made a very useful in-depth dive into the matter.

Growing pains
Thirty Glorious Years is a beautiful, long-running essay by Jonathan Hopkin on the Aeon website about how our democracy came to its present state.