Here’s where President Trump and Joe Biden stand on antitrust, social media and other technical issues 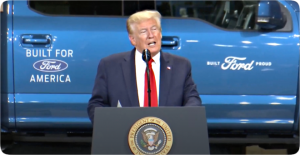 Republican President Donald Trump and Democratic candidate Joe Biden do not agree on many issues, writes Jon Swartz for MarketWatch, “but they share a caution against Big Tech that will maintain or even escalate antitrust control of the largest US technology companies, no matter who wins November 3. “

Amid antitrust inquiries into four of the world’s most prominent companies – Alphabet Inc.’s Google, Facebook Inc., Amazon.com Inc. and Apple Inc. – both Trump and Biden have stopped calling for companies to be broken up. But their animosity toward an industry that has been mistrusted by many Americans reflects a golden rule in politics: Drive toward corporate boogeyman.

The Trump administration has threatened broad regulatory action against Internet companies for what the president and other Republicans claim is anti-conservative bias, while maintaining antitrust investigations by Google and Facebook, and fighting in court for bans on Chinese-owned apps such as TikTok and WeChat.

Trump’s Justice Department is reportedly close to filing lawsuits against Google’s search and advertising activities before the election, which is likely to escape to the next administration. However, the Federal Trade Commission is preparing a possible lawsuit against Facebook by the end of the year due to unspecified antitrust violations. The FTC continues its investigation of Amazon, while the status of the Justice Department’s investigation of Apple remains unclear.

Biden, who was vice president under Silicon Valley-friendly administration of President Barack Obama, has been critical of Big Tech’s market power. He supports strict antitrust oversight and online privacy policies, but leans heavily on forcing social media companies to better politicize their sites against false information … A political working group Biden created with Senator Bernie Sanders, I-Vt., Recommends breaking up companies for anti-competitive behavior, but only “as a last resort.”

MacDailyNews Note: An overview of where Trump and Biden stand on antitrust, social media and other technical issues is in the full article here.