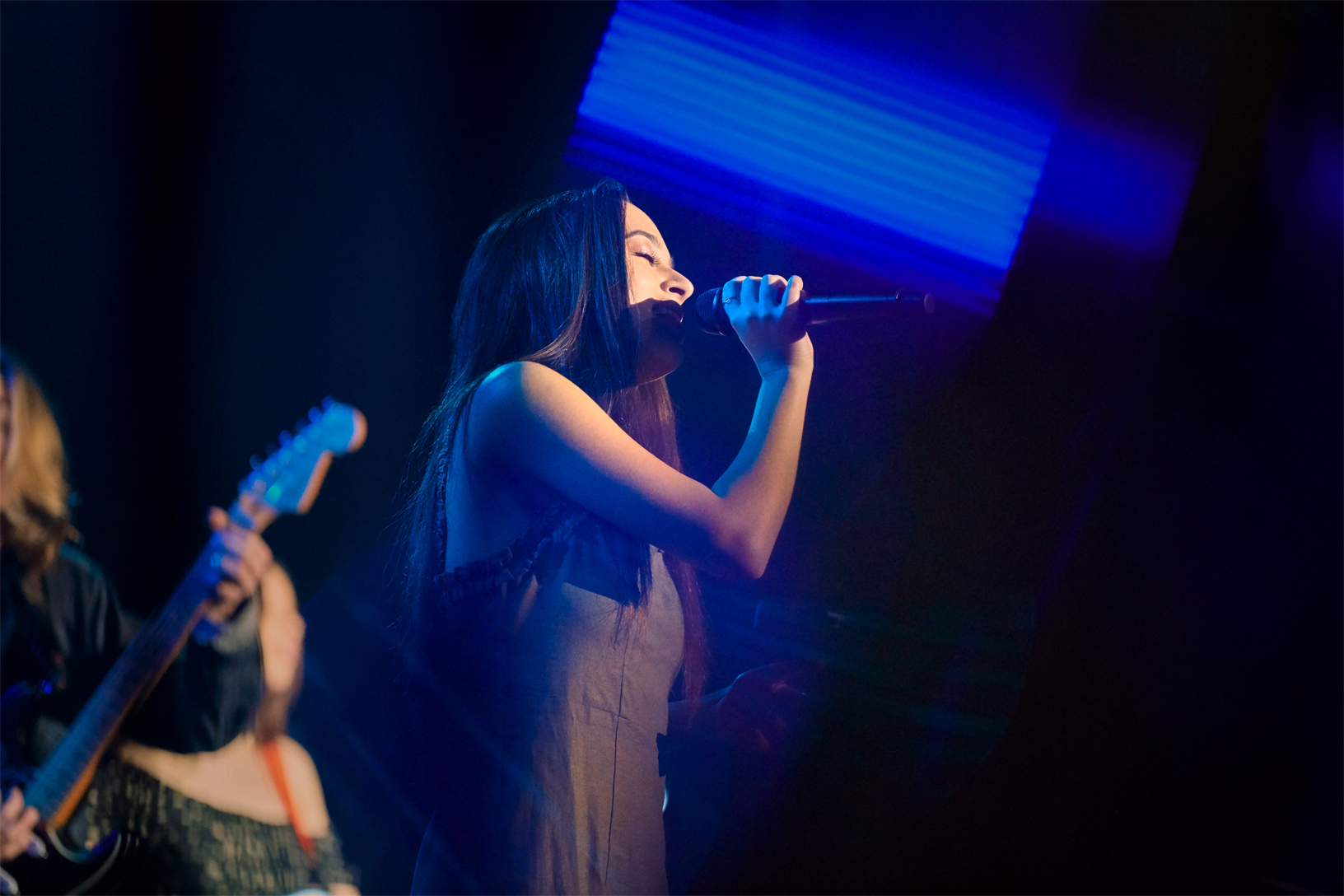 Huntington Beach educators support musicians tomorrow
This feature is the first in a series of spotlighting teachers and students using innovative technology in the classroom.

The auditorium is buzzing with the sound of eager teenagers. At the Huntington Beach Academy for Performing Arts (APA), production is in full swing on the school's annual student-curated show: "Playlist."

This year, 13 vocal students have made their own original songs, along with 24 covers of some of today's pop music hits.

Cailey Collado, senior in the music, media and entertainment technology program (MMET), takes the stage to run through her original song: "Bleed Red." As her voice rises above the microphone, three scenes weigh a live feed of Collado's performance and a student-produced music video.

Obviously this is not just students; they are true musicians.

In the school's auditorium, students use a Yamaha CL5 digital mixer, and have even rigged it to be portable, monitor and control sound levels around the theater on an iPad Pro. The school also houses a recording studio with a guitar room above the hall, and several other collaborative music-creating rooms students are encouraged to use when they feel inspired.

Back in 2004, Knight began learning a class of music technology and recording on the APA, but there was no technology. His small class of 25 students performed Cheap Trick and other rock roll songs at some restaurants, and even the Apple Store at Fashion Island in Newport Beach. Fifteen years later, the program has grown to include 1

52 students starring in MMET Popular Music and MMET Media, who writes their own music, organizes songs with Simmons and performs live in three major performances a year: a Beatles show, "Playlist" and " retro Fest. " "Playlist" is now in its seventh year.

"It was important to let the students create a show they wanted," says Knight. "We all have student leaders broke the kids into groups like five or six children, and the simple instruction selects 10 songs you want to die to perform live, that's new. Then the student producers are melting down those songs and the kids who like to write songs audition for the employees. "

What began as a music club that sings rock covers is now a practical music education lesson designed to teach students visual and performing arts, as well as the technical skills needed to succeed in the music industry.

"I wanted to record all the parts on the iMac, in Logic & nbsp; Pro & nbsp; X and GarageBand, and I wanted to register them all, isolate them and I will teach it to my colleagues."

"We're not just focusing on technology," says Knight. "It's the performing arts experience that gives them leadership skills, confidence, teamwork, all the soft skills that businesses want. You have to perform to get it, and when you marry the technology and give the kids the opportunity to have a real recording studio to work with, they'll be the next Steven Spielberg, or the next Paul McCartney. "

Knight and Nicole Kubis, MMET's Vocal Director and a 2009 Candidate from the program, have met with other teachers to do the case to learn both art and science in music education. "Apple products are equipped with the tools of [teach] it," says Kubis. "They come with GarageBand, they come with iMovie … Now more than ever, kids are diving into it, which is great. You can't be a one-pony pony in this world anymore. "

Kubis remembers her younger years at APA, when Knight asked her to dissect all the vocals on "Pet Sounds", the complex Beach Boys album, and teach it to their peers.

"I had 13 juniors and seniors, including myself, and we put in a laptop four hours a day, and just crushed these vowels," Kubis says. "I wanted to record all the parts on the iMac, in Logic Pro X and GarageBand, and I wanted to register them all, isolate them and I would teach it to my colleagues."

Knight credits Kubis with pioneering this learning format, shared audio files with students so they – literally – could walk around campus with their phones held to the ear to learn the parts. No notes, just iPhone. "It's my life. Everything I do is on this phone," says Kubis.

Today, Kubi's students own the stage as experienced artists. Cailey Collado is grateful for the trust Kubis taught her. Collado and seven other students organized a cappella to open the show, a feat she's sure would not have been possible four years ago. "Nicole has made me so comfortable with harmonies now that I can write them alone," she says.

Olivia Ooms, junior at APA starring in MMET Popular Music, came in as a vocalist and guitarist and now travels back and forth to Nashville and records her own songs as a country music artist. (She is even opened to Lady Antebellum with her band, Olivia Ooms and The Resistors.)

The show goes off (almost) with no hitch, but the students power through the songs, just like any pro. Drums, horns and backup singers line the scene while vocal majors (who all have a lead) move the audience with their own songs and modern favorites of likes like Jorja Smith and Leon Bridges. Backstage, a student crew queuing up every performance with live and pre-recorded video, powered through an iMac.

Fearless – it's a way to describe the students, who are now prepared for life after high school.

"I do not know if there is so much that the children have to prepare for something," says Addison Love, MMET's instrument leader and a 2014 degree. "The world must prepare for these children."