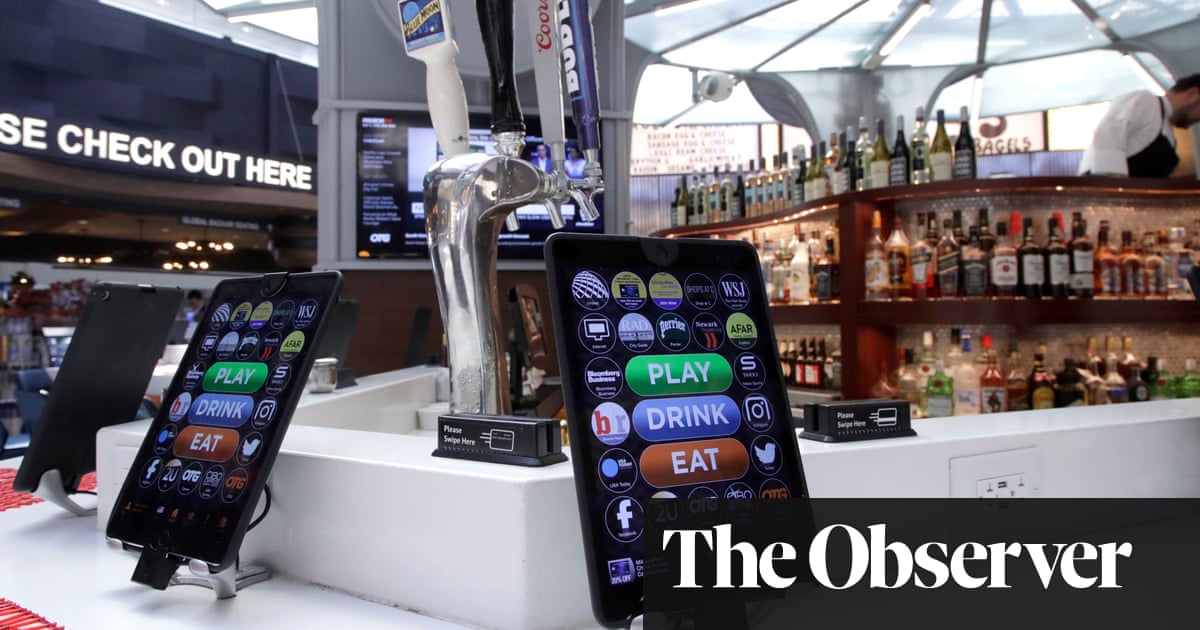 L a month, in New York, I saw the future, and I didn't like it. Let me first set the scene. Booked on an eye-catching early flight, I came to Newark airport before dawn and felt violently alone, which I often do when traveling at work: a bagel, pinging around, invisible to those I love and who loves me back. The airport was quiet and I quickly went through security. On the other hand, I sent a couple of emails and bought a newspaper, and then it hit me: I was ravenous; hungry as a wolf. I wanted some breakfast. I needed some breakfast. And then I sat down to find some breakfast.

Hunger in these situations is not straightforward. My stomach was empty, that's true. But I also had time to kill and save money in my pocket. The potential for boredom flickered away in the glare of the artificial light. I didn't want to talk to anyone, but I wanted to receive the special kind of compensation that a waiter can offer to a person traveling alone. "Right up", they tell you in America, as if you were their best ever customer, and an order with coffee the most original and bold request ever made. In the right mood ̵

1; or maybe I mean the wrong mood – this line has the potential to reduce me to tears.

But where are you going? I walked around tired. Not there, not there – and not there either. (Really, it amazes me what people can digest before the sun has risen.) Then I noticed something. At each table, in each restaurant, was an iPad attached to a rigid stand, bang smack in the middle of it. People seemed to use these iPads to order their food. I moved off and hoped to find an iPad-free eatery – the last thing I wanted was to stare at a screen, say, try to figure out how to use it – but it soon became clear that it didn't exist anywhere. Defeated, I took a seat in a French French place – let's call it Brasserie Faux Amis, where the seats looked like leather and muffins looked like mushrooms – and put on bulky writing in my order.

Had anyone sat opposite me, I would not have been able to see them without pushing my neck

My eggs were delivered by a human, but everything else had to be communicated electronically. Want hot milk? It's a key to it. Do you want a receipt? It's a key for that too (and don't expect paper). I hated this, but not as much as I hated the fact that the iPad could not be moved, or even turned off. I had no companion but had anyone sat with me, I would not have been able to see them without squeezing my neck; It would be like talking over a garden fence. Beside me, a woman tried to interest her daughter in a book, but to no avail. The child just wanted to stay away on the iPad.

According to the latest Wellbeing Index, compiled by Oxford Economics and the National Center for Social Research, one third of British adults eat alone "most or all of the time". Is this good or bad? It's complicated. For example, people can eat less when they are alone and this can in turn be a good thing about their weight. But both my gut and the reading I have done about this suggest that the downsides are greater than up. Eating is a social pleasure – doing it alone, and it can feel far more lonely than any other activity, with all the consequences on your mood. And while people can eat less, they can also eat less well (37% of us replace a meal with a snack once a week).

It is bad enough that we are already encouraged to eat so poorly by food producers and supermarkets without large companies and institutions – a whole airport! – insists that we also ignore our fellow human beings while using these things. I know they have their reasons: the cost of labor, a desire to hurry people together. But it is also inhuman. Brought the cold toasted bread I would send back but couldn't (no key to it), I lifted my eyes off the blue light of the iPad and looked around me. The word dystopian is much overused, but in this case it was perfectly appropriate – of course save for the scene to be imagined. I was there and my eyes hurt, and so did my heart.