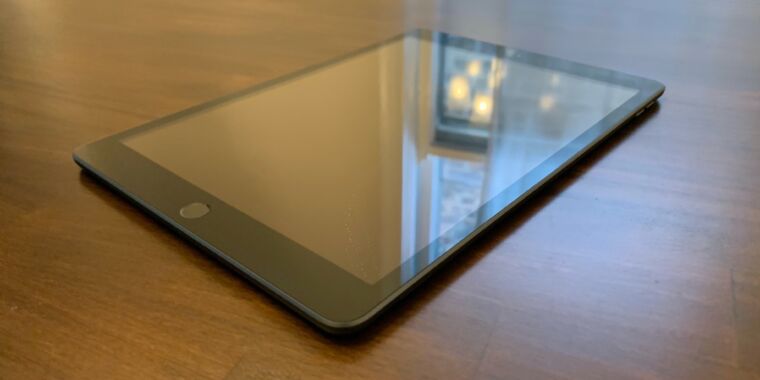 Last month, Apple unveiled and launched the 8th generation iPad. You may have forgotten; it was overshadowed by a radically redesigned iPad Air, two new Apple watches and other announcements from the company. But still, this will probably be one of the most popular iPads, if not the most popular in Apple’s selection because of one thing: price.

At $ 329 with 32 GB of storage and $ 429 with 128 GB, it will be ubiquitous in environments where there is no need for groundbreaking features, such as point of sale, industrial use and in schools. But it will also be a content consuming device for a wide range of consumers.

All that being said, there is very little different about this year’s iPad compared to the last one. In fact, it all comes down to performance. So we are going to go over just that today, along with a few quick notes on how it compares to the previous model.

So why is this a “micro-review?” Well, because there is not much to review. In almost every way except the silicon on the inside, this is last year’s iPad. It has the same dimensions, is made of the same materials, and has the same rear camera and screen. (The forward-facing camera has ƒ / 2.4 aperture, while last year’s was ƒ / 2.2, according to Apple’s specification pages.)

The same disadvantages that I talked about last year are mostly still present. There are still only two storage options: 32 GB and 128 GB, none of which are enough for people who download many videos and high quality games for a long trip. The edges are still quite large by modern standards.

Apple Pencil is a little less nice to use on this screen than on the higher iPads, and furthermore it only supports first generation pencil. The cameras are still mediocre, and the speakers only deliver stereo sound when held in the upright direction – the way you are least likely to use when watching a video that stereo sound will naturally be worth.

On the other hand, one of my biggest criticisms of the iPad from 2019 was the performance of the A10 – not that it was necessarily too slow for current use cases, but it did not invite confidence in the device’s longevity. The A12 is much faster than the A10, on the other hand, and unlike the A10, it has all the key components needed to power Apple’s current slate with great iOS features.

It is also likely to be a good investment when it comes to long-term support; Apple indicated to app manufacturers that the A12 would be an important baseline for a while to come at the developer conference this year.

But for me it is at least almost something comfortable about this now older iPad design. The iPad Pro and the new Air are especially different in design and style than this device, which follows more directly in the footsteps of all iPads that came before it. No, it will not turn any heads, but it is known, and as a tablet it is far better than anything else in its price range.

The big sacrifice you make by going with this iPad instead of the Pro or the new Air is that it does not support Apple’s trackpad-equipped Magic Keyboard or second-generation pencil. All the other differences are nice, but not critical.

But this device is placed as a budget option, and the tablet costs alone a little bit more than a magic keyboard. I point it out to say that it is unlikely that the expensive peripherals you are missing would have been on the table even if this iPad supported them – this is a tablet, not a productivity machine, and it’s about budget, not expensive attachments. As far as utility cases, it’s an old-fashioned iPad, through and through.

There is nothing wrong with that. If someone came to me and asked which tablet I should buy, and they told me that they do not want to use it as a laptop for heavy work, I would have no reservations about recommending it over the competition. This is partly due to the performance.

We ran our regular series of synthetic references on this iPad, and expected it to work in line with previously released A12 devices. As you can see below, this is generally the case.

This is a big jump in performance compared to last year’s model – which had the now four-year-old A10 – and it is largely in line with last year’s iPad Air, which had the same chip as this device. (It also means that this iPad will generally provide performance comparable to the iPad mini 2019 and iPhone XS and XR from 2018.) When it comes to CPU tasks, it is probably fast enough for everything you want to use it for.

However, the graphics are more of a mixed bag – especially compared to the far more expensive iPad Pro. This is not an ideal tablet for demanding 3D games, but it should be fine for other types of games, and it is more than adequate for any kind of video you want to watch.

The 2020 iPad is more of the same, and few will complain about it. It combines an older iPad-Air-like chassis with the A12, a two-year-old chip that Apple has identified as the baseline for its most groundbreaking apps, features and content.

While the design looks a bit dated now, it’s good enough for the price – and it does not hurt that you can use the trackless Smart Keyboard with it, as well as the first generation Apple Pencil.

That said, there are some major sacrifices compared to Apple’s advanced tablets: there is no edge-to-edge display, the screen design makes the pencil less fun to use, the speaker system does not work in both directions, it does not support Magic Keyboard, and the graphics performance is just OK compared to many other Apple gadgets.

This is the ideal iPad for children and most commercial uses, including point of sale – but it also provides all the basics for those who just want a good tablet for content consumption, but do not plan to use it as a daily driver for productivity.

Oh, and it still has a headphone jack – which is good for a budget device, since it would not be reasonable to expect beginning-level buyers to get expensive wireless headphones. (Tell the iPhone SE team as well.)