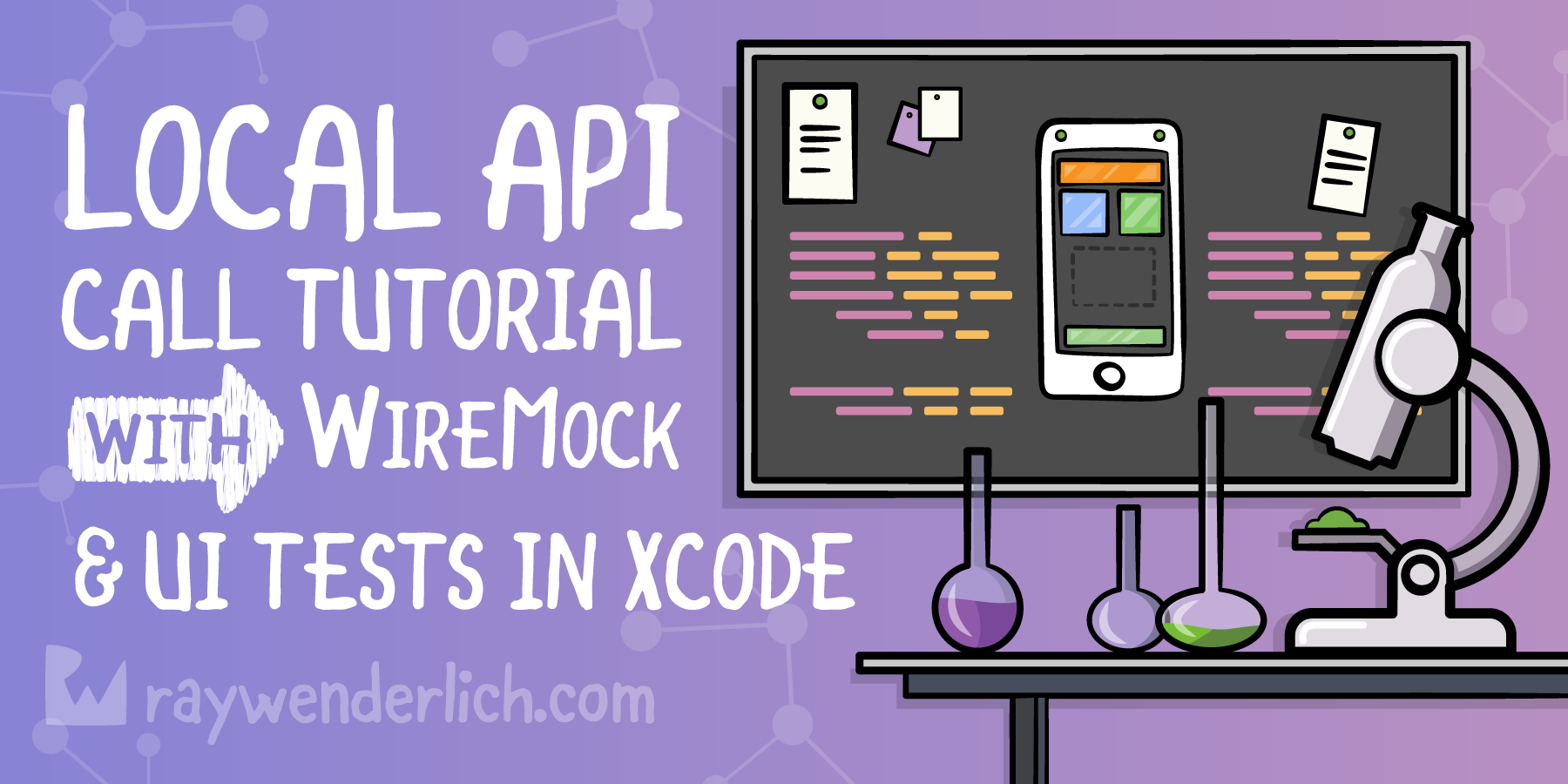 WireMock is a development tool that provides a local copy of the results of an external API call. You can use it in the context of user interface tests (UI) to provide different types of API responses.

UI testing acts as a safety net, ensuring that you deliver the intended user experience. It focuses on the end-to-end experience of your app. UI testing can also answer questions other than device testing can, for example:

First Find Download Materials button at the top or bottom of this tutorial. Download the startup project and open it. Build and run the project to check the functionality.

The Star Wars Info app uses the Star Wars API to retrieve a list of Star Wars characters. You can tap each cell to navigate to a detail screen for that character. 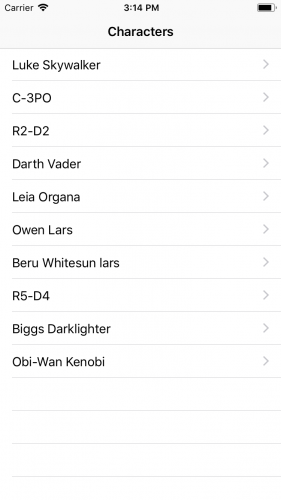 Run the tests by pressing Command-U or by clicking the menu item Product ▸ Test . You will see the app launch and navigate from list view to detail view and back. During this navigation, the UI tests validate expected conditions on both the list and the detail views.

To view the test report, go to Report Navigator in the left pane and see the test results: [19659002] 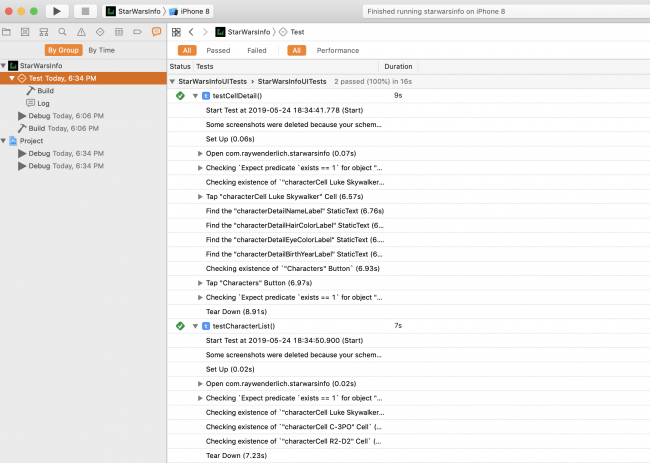 As long as your computer is online and the tests can be successful with the Star Wars API, The tests pass.

See StarWarsInfoUITests.swift to see the UI tests. The details of UI testing are beyond the scope of this article. See the iOS Unit Testing and UI Testing Tutorial for a deep dive on that topic!

This small app and its related tests work well in the current configuration, but as the code base grows, the app will rely on many more network requests. Tests will slow down and become dizzying.

Here are some issues you can predict as the codebase grows:

In all three scenarios, your tests would fail. It is a common denominator. None of these test errors are caused by a programming error or a logical problem. Test errors in these scenarios would be false positives, because the error would be beyond your control.

In this tutorial you will eliminate one of the sources of uncertainty in UI testing. You're going to stop making direct network requests and rely on a network-wiring technology called WireMock. WireMock allows you to eliminate the network as a potential source of error in UI testing.

Using WireMock, you always get the same answer for a given query on each test run. This allows you to have more confidence in your tests. If there is a mistake, you will spend less time trying to figure out why. The network is one of the more volatile components of all applications. By removing it from the list of possible causes of errors, you will be able to focus on the base functionality you are trying to test with each screen.

WireMock is an open source library that allows you to run a local web server for testing. By updating the API endpoints you call from your app while running a test, you can return familiar answers. This can help you move faster during development. By trying your app, you can receive expected responses from API requests by fixing your app on a WireMock instance.

Enough of the theory. Time to get started!

WireMock requires at least Java 7, so make sure your Mac has an updated version of Java installed. Download the latest Java Development Kit, JDK from Oracle. You run WireMock as a standalone entity. Go to the download page and get the latest stable design of WireMock. The download will be a single JAR file.

Go to the startup directory of the startup project and create a directory named Vendor . Move the JAR file to this directory. Rename the JAR file WireMock.jar to make it easier to interact with from the command line. Then open the Terminal and navigate to the Vendor directory you created.

Inside this directory, type the following command to start the WireMock process:

You should see the following:

Great! This means that WireMock is up and running. You will also notice that WireMock has created two directories in the provider: __ files and mappings .

By default, the standalone occurrence of WireMock looks for these two directories relative to the executable location.

Setting up a mock response

The sample app uses one end point from the Star Wars API to request a list of characters. That endpoint is https://swapi.co/api/people/.ebrit19659002??If you go to this endpoint in a browser, the Star Wars API page does a great job of showing you the JSON response, including headers. You are only interested in the answer here. 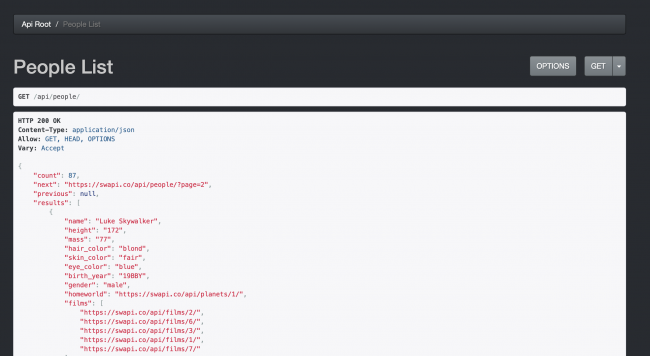 Copy the full answer except the headers:

Save this answer in the __ files directory as character-list.json .

Then you must let WireMock know how to map the map people endpoint for this answer. Create a new file in the mapping directory named character-list.json .

Make the contents of the file look like this:

This lets Wiremock know about mapping any GET request with the /swapi.co/api/people path to the character-list.json response with an HTTP 200 success status.

Your final provider directory layout should look like this:

Now, confirm that WireMock has your mapping indexed. If your terminal is still running from the previous session, stop it by pressing Control-C and restart WireMock using the command:

WireMock should have retrieved the new mapping file. To check this go to http: // localhost: 9999 / __ admin / mappings.

You should see the following output:

This output means that WireMock retrieves your mapping files. Next, check the response returned for your endpoint. Go to a web browser and type http: // localhost: 9999 / swapi.co / api / people.

You should see the following output: 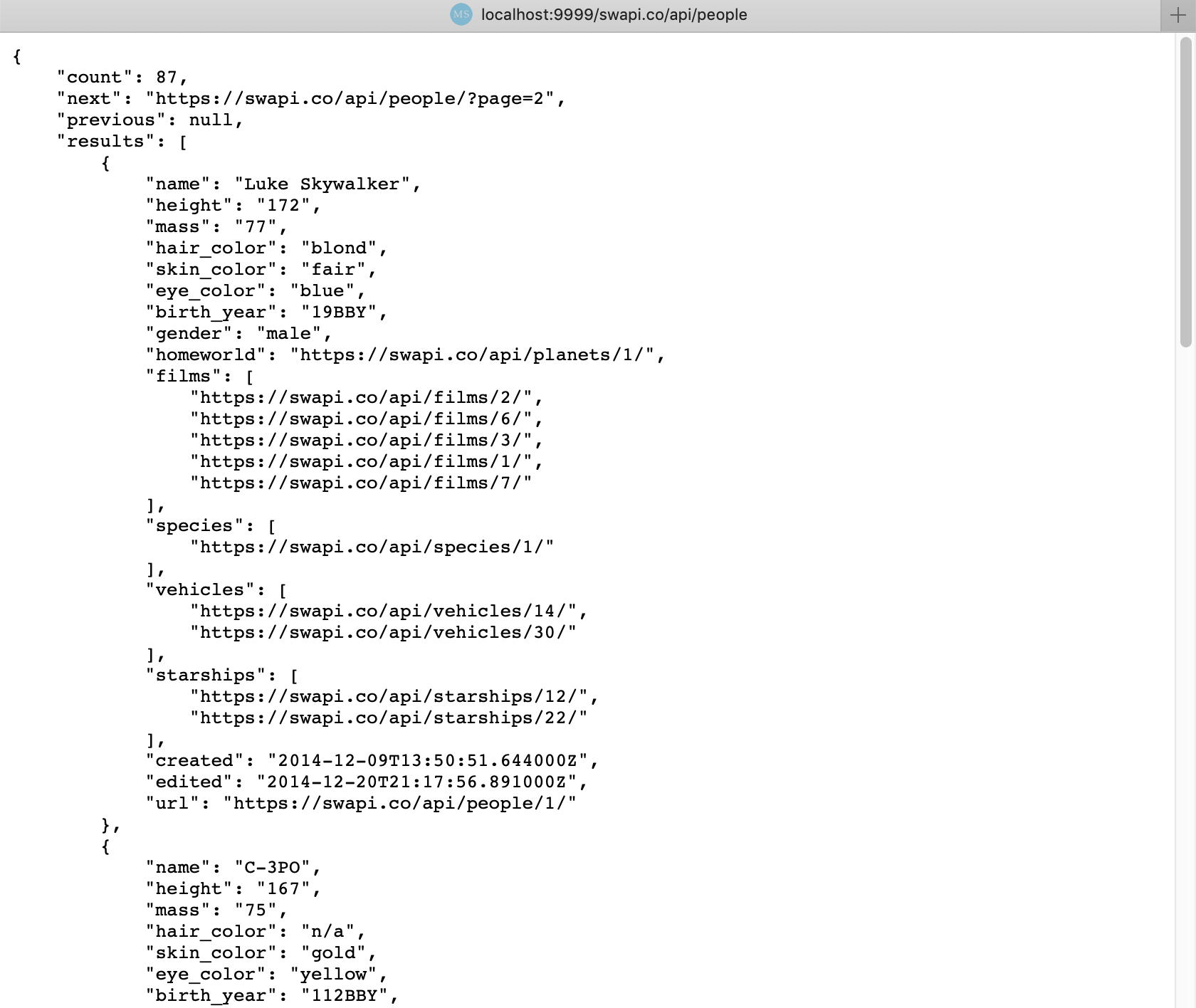 Excellent! Everything works from the WireMock page. You now integrate WireMock into your UI tests.

To integrate the WireMock instance into your UI tests, follow these steps:

First, configure your project to allow HTTP requests from a non-SSL connection. If you do not go through this step, App Transport Security (ATS) does not allow network requests to connect to WireMock.

Allowing insecure loads is normally not advisable, but for UI testing it is easier than configuring a self-signed certificate to enable WireMock SSL. In a more complex setup, you would configure the project to allow only insecure loads from your test schema with a configuration setting or other Info.plist for your test target.

Follow these steps to set up ATS for UI testing with WireMock: 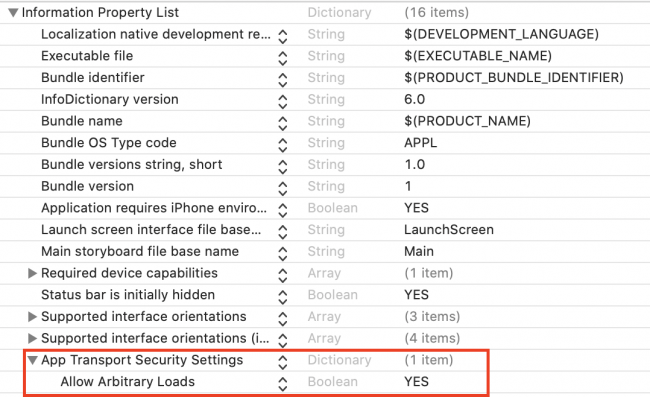 You will define the launch argument during the scheme. By configuring things this way, you can run the app in the simulator without any tests running. Once you're sure that everything is running the way you want, define the same arguments in the test code and launch the app with them. When running your UI tests, the app should behave the same way. 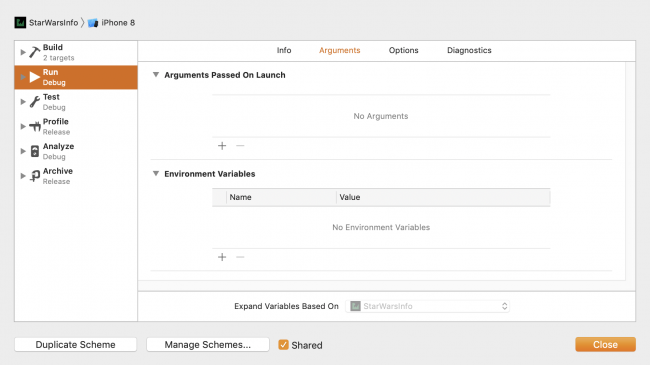 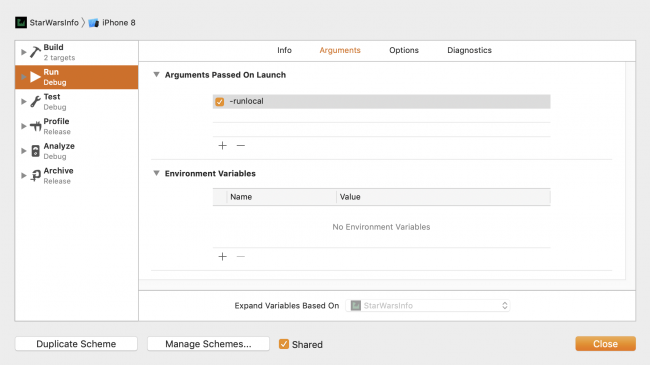 Click Close to accept the change and return to your code. [19659102] Update to use launch arguments

Now you need to update the code base to look for this launch argument and use the correct URL form.

This code inspects CommandLine.arguments which are a number of strings. If that array contains the -runlocal argument, the function returns true .

. Then use your new convenience feature in the network client. Inside the Network open StarWarsAPINetworkClient.swift . Update the property for baseURLString to a calculated property that looks like this:

If the property -runlocal is present at launch, baseURLString will use the local scheme and connect to the running WireMock instance for its data. You now have full control over the data response from the API.

Open Terminal if it is not already open and ensure WireMock is running. Navigate to the directory containing the WireMock executable. Run the same command to start WireMock:

Perform a race with WireMock

With your launch arguments set, build and run by pressing Command-R . Look at the terminal while the original list is loading. You should see the console printout when the app requests network data and WireMock returns it.

Now complete the final steps to get your UI tests set up with the right launch arguments. 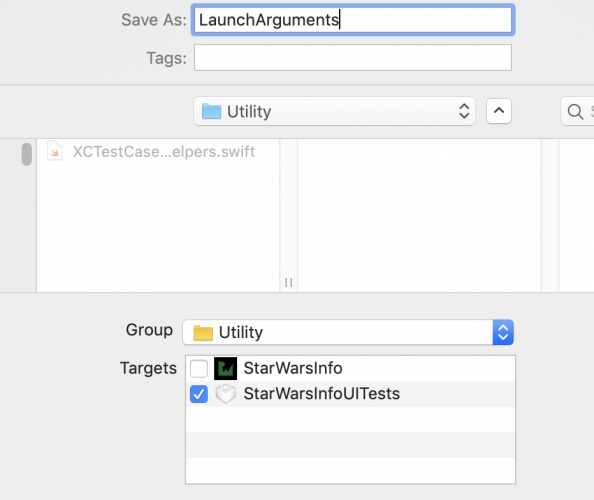 Finally expands the group Tests in the project navigator and open StarWarsInfoUITests.swift . In each of the two tests, right after creating the local app add the following line:

This adds your runlocal launch argument to each test.

Now you can test the UI test running against WireMock instead of the live network.

Switch back to Xcode and run your UI tests by pressing Command-U . If you look at Terminal while the tests are running, you will see output from WireMock when your tests request data and they are returned from the local server. 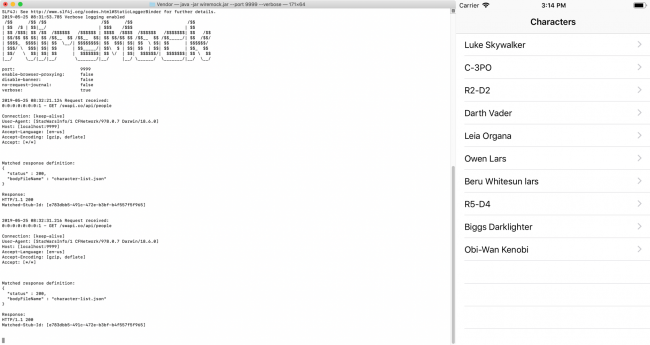 Congratulations! You have eliminated the network as a dependency on your UI tests.

In addition to spotting the same answers you always get from live network requests, you can now return different scenarios to the UI and see how the app responds.

Try adjusting your scoffed responses to test different streams in your apps. WireMock also allows you to vary responses by many different variables for the same endpoint, such as query parameters and headers. Check out the documentation to see what else is possible.

Good luck and leave a comment for the comments!