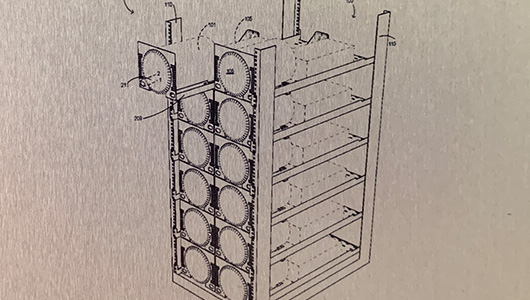 MacStadium, Inc., the leading provider of enterprise-class cloud solutions for Apple Mac Infrastructure, announces that the company has been granted US patent no. 10,327,351 for sledge, magazine and shelf assembly for computer centers. This increases MacStadium's patent portfolio to five patents issued back to 2016.

MacStadium has a history of designing and redesigning technology to rack up Apple Mac computers for optimal performance, uptime and usability in enterprise data centers. Because Macs are necessary for the development and testing of iOS, iPad, watchOS, tvOS and Mac apps, MacStadium's cloud infrastructure is critical for everyone from large companies to startups developing apps within the Apple ecosystem.

MacStadium's most recent patent covers advances in racking up the 201

3 Mac Pro that the company continues to distribute. Despite the fact that the 2013 Mac Pro is an older product line from Apple, it is still the top choice for many teams who want a mix of power, high core density and flexibility when it comes to automation and base OS. For example, the 2013 Mac Pro is the most powerful Mac compatible with VMware's ESXi or any Linux variant.

"Technology like this is crucial for MacStadium and our customers, as we have over 20,000 Macs distributed in data centers around the world," said Greg McGraw, CEO of MacStadium. "This sleigh, along with even more recent innovations, allows us to meet customer needs for scale, uptime, performance and support."

MacStadium continues to innovate as Apple expands its range of Mac computers, including patent pending iMac Pro and 2018 Mac mini.

Apple, Mac, iOS, iPad, watchOS and tvOS are registered trademarks of Apple Inc., registered in the United States and other countries. Other product names, logos and brands belong to their respective owners.