New Emoji Update Version 12.0 Another example of commitment to accessibility of Apple 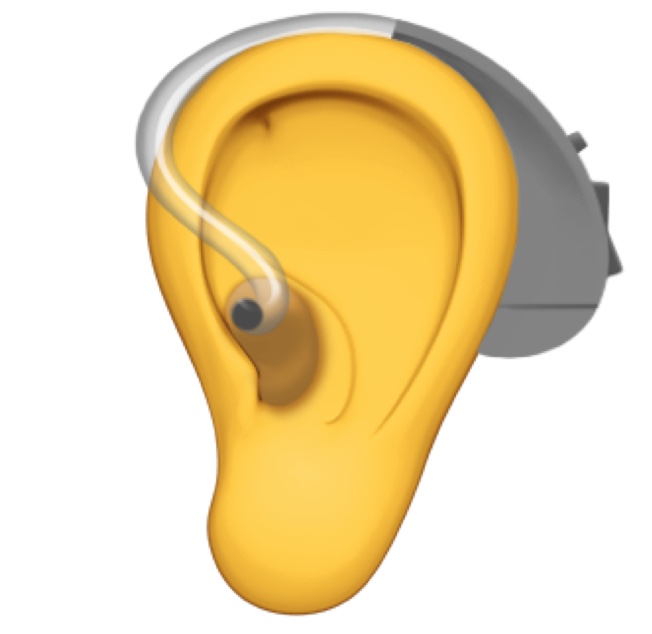 COMMENT: 02.15.19- A slew of 15 new emojis reflecting people with disabilities is coming in version 12.0 update for smartphone devices, including the iPhone, but the idea was basically to submit the special minimal digital icons for inclusion as part of our way of expressing our feelings?

As I reported here in this column last week, the Unicode Consortium has approved 59 brand new emojis that will make their way to all the smartphones once towards the end of the year. What specifically stood out from the gang was the more inclusive nature that represents people who are disabled, which took my attention as a person with two disabilities. Firstly, I am visually impaired and totally blind (from losing sight back in July 201

3 due to health-related complications) – a fact that my regular readers already know – and the other, which I reveal here for the very first time, I am also hearing impaired in my right ear (something that happened recently, two days before Thanksgiving in 2017 to be exact, in which I inexplicably lost my hearing, and my case was later diagnosed as idiopathic, meaning there was no known cause) and have since had a hearing aid to help listen to sounds directed at that ear. 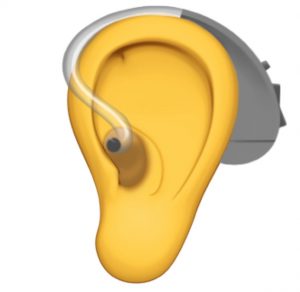 An example of emoji # 7, "ear with hearing aid", just one of 15 upcoming new emojis to be released in version 12.0 update. (Photo: Unicode Consortium)

Stories pertaining to disabilities – namely, those relating to Apple and accessibility – are one of the special topics I like to cover and highlight in this column from time to time. (I even have a special section on my column archive page just for these types of articles: find it in the "Coverage Highlights" tab under "Apple & Accessibility"). So naturally, when I read the article on Fast Company magazine's website from a post on my Facebook news feed, I wrote a news about it here in this column.

After my story was published, I was surprised – more happy than shocked – to get into a newsletter email as a subscriber, a related article from Macworld the magazine of the new emoji who went more thoroughly into who and what the Unicode Consortium is and, more specifically, who was responsible for the proposal of the 15 emoji subjects that were designed to reflect people with disabilities.

The Unicode Consortium – According to the article's author, Human Resources Author Jason Cross – consists of representatives from a number of hardware and software companies who agree on updates to the Unicode standard, which is a common way of encoding and representing text in digital formats which is the basis for sending and displaying text in virtually any case

Cross wrote, "Emojis is part of the Unicode standard, and the group comes together every year to determine which new icons will be added to the official list."

Then came the great revelation, at least for me, for the specific group responsible for suggesting the party of new Emojis representing the disabled: Apple.

Cross wrote: "All Apple's proposed accessibility emojis is included in the 12.0 standard."

Unicode Consortium agreed to include all nine of Apple's proposed accessibility emojis – a story that Cross first reported last year – which was written in a proposal letter from Apple and sent to the consortium.

The following are excerpts from the same letter from March 2018:

One in seven people around the world has some form of disability, whether physical disability involving vision, hearing or loss of physical motor skills, or a more hidden, invisible disability . The current selection of emoji provides a wide variety of representations of people, activities, and objects that are meaningful to the public, but very few speak to the life experiences of those with disabilities.

At Apple, we believe technology should be accessible to everyone and provide an experience that serves individual needs. Adding emoji emblematic to users' life experiences helps promote a diverse culture that includes disability. Emoji is a universal language and powerful communication tool, as well as a form of self-expression, and can be used not only to represent its own personal experience but also to show support for a loved one.

This new set of emoji We suggest that we provide a wider range of opportunities to represent basic categories of disabled people. This is not meant to be a comprehensive list of all possible images of disabilities, but to provide a starting point for greater representation of diversity in the emoji universe.

Each individual's experience with their disability is unique, and the representations therefore have unlimited possibilities. It would be impossible to cover all possible uses with a limited number of characters. For this proposal, we have chosen a set of emoji that was inclusive for a large number of people in four main categories: Blind and Low Vision, Deaf and Hearing Impaired, Physical Motor and Hidden Disabilities.

Developed in collaboration with internationally respected community organizations such as the American Blind Council, the Cerebral Palsy Foundation, and the Deaf Society, we believe that this proposal is an important step forward to represent several different people, and we hope it will provide a global dialogue on better representation for the disabled.

These emoji include people in wheelchairs, with mechanical arms and legs, using blind probes, hearing aids, and service and guide dogs for the disabled.

So why is this significant? Apart from making emojis more inclusive for everyone as for the disabled, there is another example of the commitment to accessibility by Apple.

Apple products are already available right out of the box for the disabled. For example, take VoiceOver – a screen reader software built into MacOS and iOS designed for the visually impaired – so if you're blind, you don't need help setting up your Mac or IOS device. When you take a new Mac out of the box, it will start talking to VoiceOver after launching and guide you through the installation process. The same goes for any iOS device out of the box after turning it on for example buying a new iPHone, iPad or iPod touch, where for those who know it, just enable VoiceOver by pressing Home- button three times (if the unit has a Home button).

This commitment to accessibility for Apple for its customers with disabilities is not new and goes back as far as the 1980s, as evidenced by a story I wrote on Low End Mac (another website I write for) as Displayed in three vintage Apple posters from circa 1987 showing that disabled people operate and use the Mac with alternative computing interfaces – such as touch and voice control and assistant technology.

After I contacted Apple directly through his media aid, a company spokesman – who refused to be identified in my story – confirmed the existence of the three vintage posters in my possession and said:

"They were the result of the work with our Early Disabilities Solutions group – a kind of precursor to today's accessibility group that supports creating products and technology that everyone can use. "

And the approval of 15 new emojia reflects people with disabilities by the Unicode Consortium For inclusion in its version 12.0 update that comes later this year to all smartphones is just one example: a small step spied by Apple which is a big step forward thanks to its commitment to making the technology available to everyone.