Photo Stacking in IOS with Vision and Metal 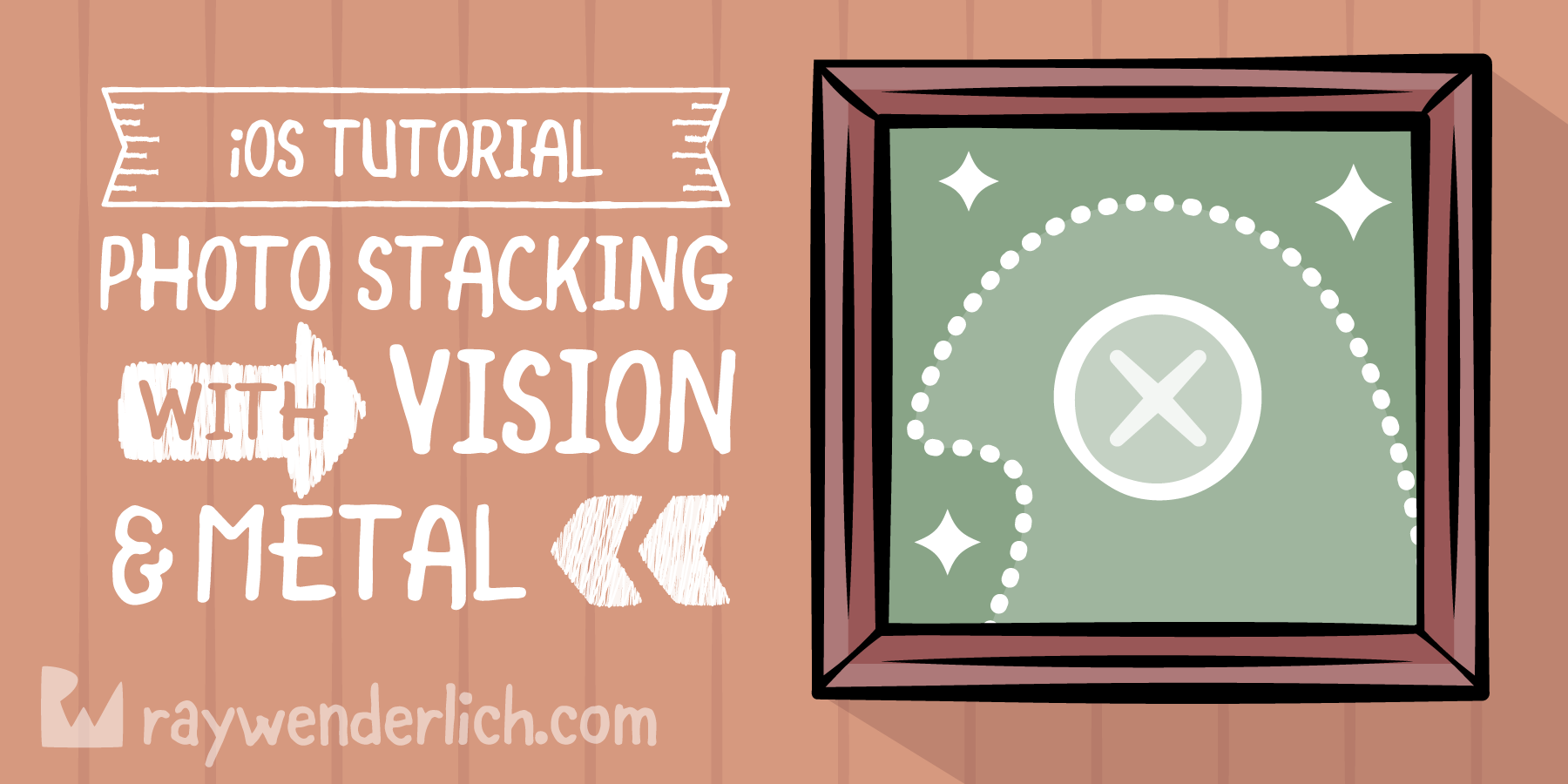 What is Photo Stacking? Well, imagine this. You're on vacation, somewhere magical. You are traveling around the UK and visiting all the Harry Potter movies!

It's time to see the sites and take the most amazing photos. Where else do you rub it in your friends' faces that you were there? There is only one problem: There are so many people. : [

Ugh! Each picture you take is full of them. If only you could cast a simple spelling, like Harry, and make all these people disappear. Evanesco! And poof! They are gone. It would be great. It would be the [a] st. ;]

Maybe there is something you can do. Photo Stacking is an emerging calculation photography trend that all the cool kids are talking about. Want to know how to use this?

In this tutorial, you use the Vision framework to learn:

Exciting, right? Well, what are you waiting for? Read on!

Click the button Download materials at the top or bottom of this tutorial. Open the startup project and run it on your device.

Note : Since you must use the camera and Metal for this tutorial, you must run it on an actual device and not the simulator.

You should see something it looks like a simple camera app. There is a red record button with a white ring around it and it shows the camera's input screen.

Surely you've noticed that the camera seems a bit shaky. That's because it is set to record at five frames per second. To see where this is defined in code, open CameraViewController.swift and find the following two lines in configureCaptureSession () :

The first line forces maximum frame rate to be five frames per second. The second line defines the minimum frame as the same. The two lines together require the camera to run to the desired frame frequency.

If you press the record button, you should see the outer white ring fill the clock. But when it's done, nothing happens.

You have to do something about it right now.

Save pictures to the files App

To help you troubleshoot the app while you go, it would be nice to save the photos you are working on to the Files app. Fortunately, this is much easier than it sounds.

] Set both values ​​to YES . When done, the file should look like this: 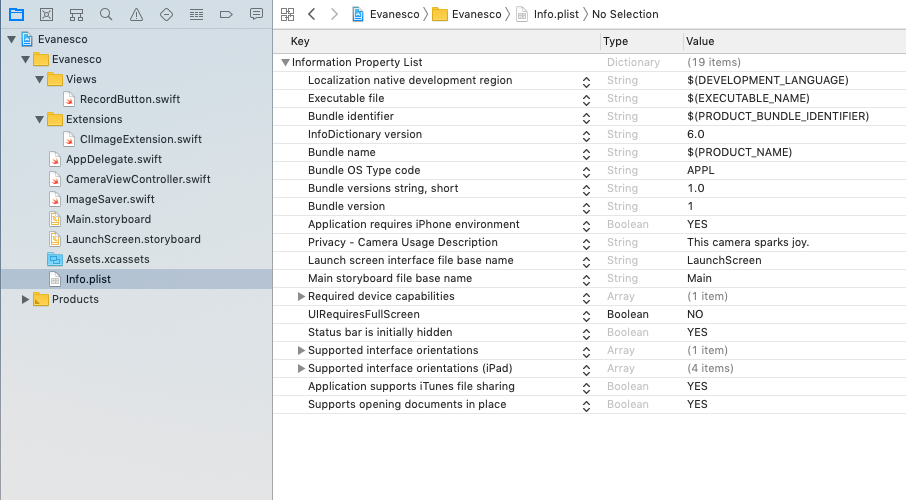 The first key makes it possible to share files in the directory Documents . The other allows the app to open the original document from a file provider instead of receiving a copy. When both of these options are enabled, all files stored in the app's directory are displayed Documents in the app Files . This also means that other apps can access these files.

Now that you've given Files app permission to access the directory Documents it's time to save some pictures there.

Along with the startup project, a helper is struct called ImageSaver . When instantiated, it generates a universal unique identifier (UUID) and uses it to create a directory in the catalog Documents . This is to ensure that you do not overwrite previously saved images. You use ImageSaver in your app to write your photos to files.

In CameraViewController.swift you define a new variable at the top of the class as follows:

Then scroll to recordTapped (_ :) and add the following to the end of the method:

Here you create a new ImageSaver every time the recording button is tapped, ensuring that each recording session stores the images to a new directory.

Then scroll to captureOutput (_: didOutput: from :) and add the following code after the first if sentence:

With this code you are:

If you look in this folder, you will find the 20 pictures you captured during 4 seconds of recording.

Note : If you do not see the folder right away, use the search box at the top of the app Files .

OK, cool. So what can you do with 20 almost identical pictures?

In computing photography, photo stacking is a technique where multiple images are taken, adjusted and combined to create different desired effects.

For example, HDR images are obtained by taking multiple images at different exposure levels and combining the best parts of each. It is so that you can see detail in shadows as well as in the bright sky at the same time in iOS.

Astro photography also makes great use of photo stacking. The shorter the image exposure, the less noise is picked up by the sensor. So the astrophotographers usually take a lot of short exposure pictures and stack them together to increase the brightness.

In macro photography, it is difficult to get the whole picture in focus at the same time. With photo stacking, the photographer can take some pictures with different focal lengths and combine them to give an extremely sharp image of a very small object.

To combine the images together, you must first adjust them. How? IOS provides some interesting APIs that can help you with that.

To make your code more readable, you will create a new class to handle

Create a new, empty Swift file and name it ImageProcessor.swift .

Remove any specified import ads and add the following code:

Here you import the Vision framework and define the class ImageProcessor along with some necessary features:

Then add the following method in ImageProcessor class:

It seems like many steps, but this method is relatively simple. You will call this method after you have added all the captured frames. It will treat each frame and adjust them using the Vision framework. Specifically, in this code, you are:

These last two methods are the meat of the Vision code your app needs. You perform the requests and then use the results to change the images. Now all that is left is to clean up after yourself.

Add this following method to the end of ImageProcessor class:

In cleanup () just delete the two frame buffers, reset the flag to indicate that you no longer process frames, and set the finisher to null .

Before you can build and run your app, use ImageProcessor in CameraViewController .

Open CameraViewController.swift . At the top of the class, define the following property:

Then you find captureOutput (_: didOutput: from :) . You will make two small changes to this method.

and during the call to stopRecording () continued in if the statement, add:

Build and run your app and ... nothing happens. No worries, Mr. Potter. You still need to combine all of these images into a single masterpiece. To see how you do it, read on!

NOTE : To see how your adjusted images compare to the original captures, you can create a ImageSaver in ImageProcessor . This will allow you to save the adjusted images in the Documents folder and view them in the File app.

There are several different ways to combine or stack images together. The simplest method is undoubtedly only to the average pixels of each location in the image together.

If you do this for each dot coordinate, your final image will be the average of all the images. The more images you have, the closer the average will be to the background pixel values. If something moves in front of the camera, it will only appear in the same location in a few pictures, so it will not contribute much to the average. Therefore, moving objects disappear.

How to implement the stacking logic.

Now comes the very funny part! You should combine all of these images into a single stunning image. You must create your own Core Image kernel using Metal Shading Language (MSL) .

Your simple kernel will calculate a weighted average of the pixel values ​​for two images. When you average a lot of pictures together, some moving objects should just disappear. The background pixels will appear more often and dominate the average pixel value.

You start with the actual kernel, which is written in MSL. MSL is very similar to C ++.

Add a new Metal file to your project and mention it AverageStacking.metal . Enter the template code and add the following code to the end of the file:

With this code you are:

Note : It is very important to understand that this feature will be called once for each pair of corresponding pixels between the two images. The sample_t data type is a pixel sample from an image.

OK, now that you have a core function, you need to create a CIFilter to use it! Add a new Swift File to your project and mark it AverageStackingFilter.swift . Remove the import task and add the following:

Here you define your new CIFilter class and some features you need for it. Notice how the three input variables match the three parameters of your core. Coincidence? ;]

At this point, Xcode probably complains that this class is missing an initializer. So, time to fix it. Add the following to the class:

With this initialization you get:

Please wait ... when compiled and link your metal file? Unfortunately, you have not yet. The good news is that you can get Xcode to do it for you!

To compile and link your metal file, you must add two flags in Build Settings .