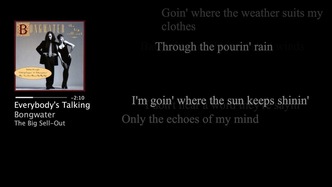 ScreenSleeves discovers which music player is playing and displays cover art and details of the current track.

ScreenSleeves displays the album cover of the current song with some details, self-texts, in some nice, simple ways (it has several themes). Perfect for down-time or parties.

Important note Screensleeves has a long history as a screensaver. Security Changes in MacOS Mojave has made it impossible to continue as a true screen saver (which is a system add-on). The solution has been to put ScreenSleeves in its own "stand-alone" app, which has other benefits (such as a small floating window when not in full-screen mode) and is something that users have asked throughout their history. This standalone version replaces earlier versions that are not currently supported and will not run on Mojave. It has a free trial, which requires a license key.