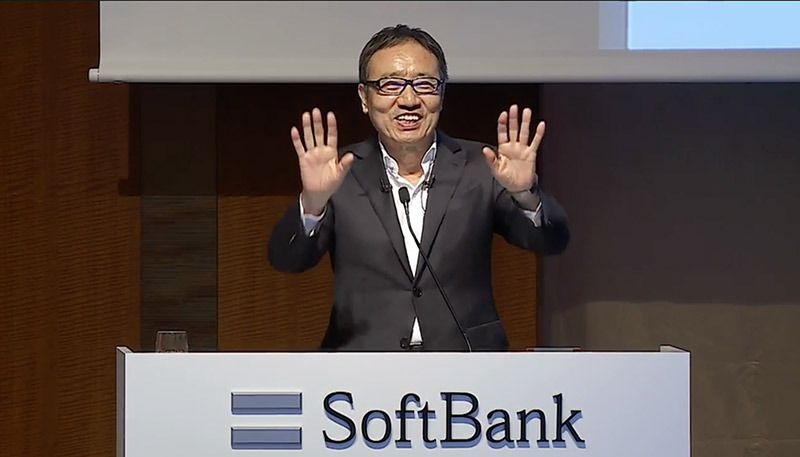 SoftBank President Ken Miyauchi during a quarterly earnings presentation Monday jokingly suggested that this year's iPhone refresh will hit the store shelves for ten days before the end of September, a date that falls square in line with Apple's typical release timeline.

During the meeting, Miyauchi was asked about the upcoming implementation of Japan's revised telecommunications business law, scheduled to take effect on October 1. As noted by Mac Otakara a reporter specifically asked how the company plans to manage the launch of the iPhone, which is believed to be launched sometime in September.

Currently, mobile phone operators are packing data and device fees on contracts, with large suppliers demanding exorbitant data prices to compensate for hardware subsidies on large ticket items such as the iPhone. The complicated process will be changed by the new law, which requires carriers to separate data and device charges, according to a report by from the Japan Times published in March.

SoftBank has gone on record as saying that it already complies with the rules described in the revised statutes.

"I honestly think about what I should be doing for about ten days," Miyauchi said, referring to the iPhone's supposed launch and the revised law. "Sorry, I shouldn't say that. Nobody knows when the new iPhone will be released […] When it is, it will be separated for at least 10 days. After that, it will be part of a bundle." [19659008] The commentary was apparently made in jest, but there is a possibility that Miyauchi's coy reference may be closer to the truth than he let go.

Apple typically announces new iPhone models at a special media event held on a Tuesday or Wednesday in September, opening pre-orders for the device this Friday. That model voted for the iPhone XS, which was unveiled on Wednesday and launched the following Friday. Outliers, such as 2017's iPhone X and 2018's iPhone XR, were announced in September before going on sale in October.

While invitations to this year's event have not yet expired, Miyauchi's allegedly false timeline makes sense. September 20 falls on a Friday, which means Apple can prepare for a debut during the week of September 9.

Miyauchi's "joke" response comes an hour and six minutes to a video of the earnings presentation uploaded by SoftBank. [19659008] Apple was rumored to launch successor models of iPhone XR, XS and XS Max this fall. According to the latest unconfirmed leaks, the devices will boast roughly identical dimensions as last year's models, while wrapping up new features like a triple camera on advanced variants and larger batteries and fresh colors for the XR series at the start level. Evidence also suggests that Apple will implement a reworked Taptic Engine in a potential phase-out of existing 3D Touch technology.

Apple is reportedly ramping up production of the next generation handset in preparation for a fall launch.