The HIV-positive caregivers work to end AIDS in Africa 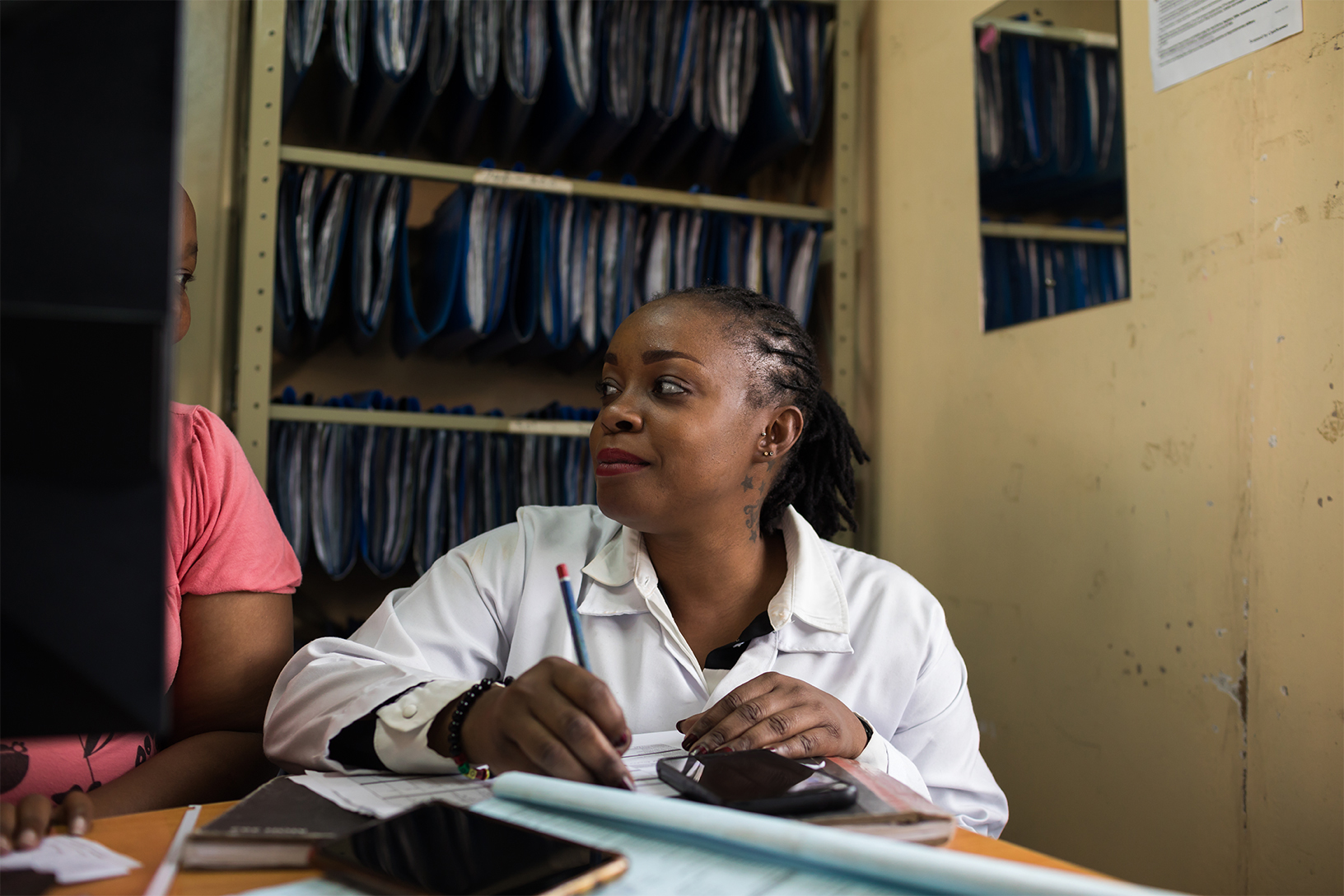 The HIV-positive caregivers work to end AIDS in Africa
Dotty Nyambok is an HIV counselor at Embakasi Health Center in Nairobi, Kenya. She is halfway through her list of patients when two girls enter the tent.

Helima, 18, is here because she suspects she has received HIV from her boyfriend and her friend Winny has come to support her.

While waiting, Dotty Helima asks what she thinks will happen if she tests positive. With ugly self-esteem, she answers, she will die.

That's when Dotty shares something by himself. It is information she reveals when she feels that someone is in desperate need for goodness and hope.

"I'm HIV positive," says Dotty. "So when you have HIV, you will continue to live because you want to take your medicine."

The girls switch surprised, shy smile in the tent at Embakasi, a facility where the HIV treatment services have been backed by Apple's (Red) partnership since 201

Since the creation of Bono and Bobby Shriver, RED (RED) has raised more than $ 600 million to support the Global Fund to fight AIDS, tuberculosis and malaria, of which $ 200 million has come from the partnership with Apple, the organization's largest company donor.

Last year, Kenya had 53,000 new cases of HIV. Young women are infected twice as high as young men. As high as these numbers work, they are a big improvement from years ago.

In 2000, a dizzying 9.3 percent of all adults in Kenya were HIV positive. At the same time, because the drugs were inadequate, the World Health Organization states that lifesaving antiretroviral drugs (ARVs) should only be administered when a patient's CD4s, which measure the immune system's health, fell under a very low brand name. This meant that patients had to be very ill for access to ARV, and for many it was too late.

The gloomy landscape was newer history when Dotty discovered she was pregnant in 2007, 19 years. During a prenatal visit, a clinician Dotty told her she was HIV positive and pointed her at a treatment clinic two hours away. There was no advice, no compassion and no follow-up.

The experience left her traumatized and in denial – she did not tell anyone about her status and did not seek treatment.

Dotty's son died in the arms of just six weeks old. He was buried in a food oil box – the least they could find.

It is one of thousands of facilities in Kenya and seven other countries in sub-Saharan Africa that began to receive funding from the Global Fund in 2002.

The Global Fund has helped radically change access to HIV treatment, providing 17.5 million people with ARVs – now available from the moment they are testing positive. As a result, Kenya has had 52 percent fall in new HIV infections since 2000. As of last year, only 4.8 percent of all adults were HIV-positive.

"I decided to advise because I really do not want what happened to me to repeat itself."

"Global Fund and (RED) have had a major impact on the life of HIV positive patients," says Robina Anene Muli, who runs the Embakasi Health Center. "Especially when it comes to test sets, ARVs and other substances – they provide 80 percent of our supplies and funding."

During his first year at Embakasi, Dotty was introduced to Mentor Mothers, a group of peer teachers who are HIV positive and have born HIV-negative babies after taking ARVs. The group was created as part of the CCC expansion, with Global Fund grants.

After a few months of treatment, Dotty found out she was pregnant again.

When Morgan was six months old, Dotty sought to be a mentor on Embakasi.

"I decided to advise because I really do not want what happened to me, to repeat itself," says Dotty. "My purpose is to touch a heart – and if I diagnose someone I feel we are attached."

On many occasions, HIV positive girls like Dotty change the way people live with HIV.

"Peer educators are an important part of the most effective HIV treatment programs," said Luisa Engel, Chief Impact Officer at (RED). "Their work ensures that life-saving information reaches those who need the most and they act as a powerful force against stigma."

Three years ago, Dotty started a new role with Embakasi, as an HIV test advisor. Sometimes she takes an HIV test in front of the patients, to prove that she has the virus and to show them that a living and living life is possible.

"I would like to see another opinion about HIV," says Dotty. "And that's what I hope to do when I reveal my status."

Back in Dotty's tent, Helima's results are clear. She places the test strip between examples of what a positive and negative result looks like.

"Tell me what you see and what it means," says Dotty.

"Negative," says Helima. In a moment, the voltage dissolves. After a chat about how to protect themselves, Dotty sends the girls off with warm farewell.

On Dotty's trip home that evening, she takes some meat to cook for dinner on the hob in the studio she and Morgan, now nine years old, share.

After dinner at 7:58 pm, an alarm is heard on Dotty's phone. It signals the start of a ritual they have repeated every night for the past two years – ever since Morgan was old enough to understand his mother's disease.

Morgan goes over to a small chest of drawers, pulls out a bottle of pills and gently taps one out. He transfers ARV to his mother who swallows it with water.

This is the front line of the war against AIDS in Africa. And so it is won, an expression of love, an act of kindness, at a time.