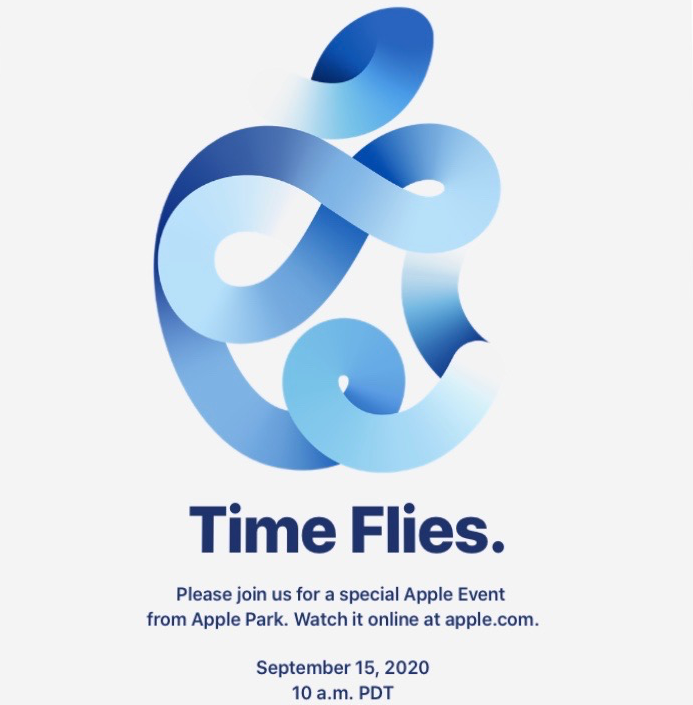 NEWS: 09.08.20 – Apple announced today that it will host a special event next Tuesday, September 15, from the headquarters in Cupertino, California, which will be broadcast live online.

The special Apple event – called by the company as “Time Flies” on invitations sent electronically to the media on Tuesday – does not include information other than date and time, as well as where to look. Due to today’s global pandemic and social distance demands, the event will be streamed live from Apple Park, where Apple CEO Tim Cook is expected to unveil a handful of new products, as it regularly enjoys clockwork at this time each year. 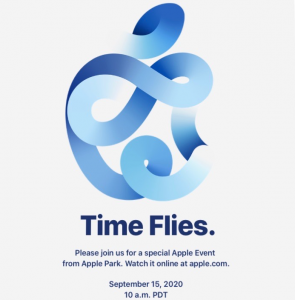 The invitation to the special Apple event on September 15, 2020, which was sent out electronically to media members on Tuesday. (Photo: Apple, Inc.)

At last year’s special event, Apple announced its new iPhone models – iPhone 11, 11 Pro and 11 Pro Max – along with an updated iPad (seventh generation) and Apple Watch Series 5. Based on the invitation slogan, “Time Flies,” various media expect Apple Event next Tuesday will only focus on the company’s latest iteration of the smartwatch with the iPhone announcement coming at a later date.

**AD: For the latest price drops, deals and discounts on discontinued hardware or devices as a result of next week’s product announcements, be sure to check out the exclusive and award-winning Apple products price tracking on the MacPrices website. Prices are updated daily!

In light of today’s announcement from Apple, Macworld reports that the previous rumors that had swirled – about a quiet Apple Watch launch that led to an unconventional fall update season (due to COVID-19) and an iPhone event later in October – have, after all, proved to be true.

According to Macworld, the doodleed Apple logo in blue with the “Time Flies” line below it on the event invitation appears to be a thinly veiled reference to a new Apple Watch. The magazine reports that if you open the invitation using Safari’s augmented reality (AR) display on an iPhone, it will be animated to “9.15” and then back to the Apple logo. (In addition, you can also watch this animation by visiting the event page on apple.com while on an Apple smartphone, and when you are there, tap the logo on the web page).

Macworld also points out that the shade of blue is indicative of the classic Apple logo with Aqua theme, and seems to suggest recent rumors that have suggested that a new dark blue hue will be available for the “iPhone 12” series.

Prior to today’s announcement from Apple, Bloomberg reported last Tuesday that the Cupertino company is preparing a comprehensive product update this fall, which includes a new iPad Air featuring an edge-to-edge iPad Pro-like screen, two new Apple Watch models, and a new smaller version of the smart speaker, HomePod. Apple’s first over-the-ear headphones – outside the Beats brand – are reportedly also in the works.

According to people familiar with the situation who spoke to Bloomberg (and asked not to be identified as the unannounced products discussed), Apple plans to launch four new iPhone models in October with a different design, a wider range of screen sizes and most especially: 5G connection.

Bloomberg reported that the four new iPhones will be divided into two basic and two high-end models – called the “iPhone 12” series by most media (e.g. Macworld) as it chose not to label it as (presumably since Apple has not officially given it a name yet) – and everyone wants OLED screens with enhanced color and clarity. The two regular phones come in a new 5.4-inch size and a 6.1-inch option, while the Pro versions will offer a choice between a 6.1-inch or a larger 6.7-inch screen (which will be the largest ever put in an iPhone to date). In addition, all the new Apple smartphones will have an updated design with square edges that are similar to the iPad Pro (or reminiscent of the iPhone 5 from 2012, as some sources have suggested).

Earlier today, after the announcement of the special Apple event, according to Engadget, the event looks like it will be a Watch-heavy show with Apple expected to unveil new Apple Watch models plus an updated iPad.

Per Engadget has rumors that the “iPhone 12” series will not actually be unveiled until sometime in October, which makes it possible that next Tuesday’s special event will only be about portable devices such as Apple’s smartwatch. The technology and news website points to the event’s tagline – “Time Flies” – as an indicator that Apple Watch will be the show’s most important player.

As for rumors of an updated version of the Apple Watch, Engadget reports that the portable device is expected to be called “Series 6”, and of course has watchOS 7, and will reportedly pack a larger battery, but no Force Touch (as it is rumored by some sources). In addition, a new low-cost Apple smartwatch is also expected, which Apple has reportedly developed to replace the Series 3 as the company’s budget option.

Engadget also reports that today’s announcement comes after weeks of speculation about Apple’s Fall timeline that the Cupertino company has held annually in September since 2012, and tends to stage the events – historically, iPhone revelations – on the second Tuesday or Wednesday of the month. . This year, however, Apple CFO Luca Maestri confirmed during the company’s earnings call for Q3 2020 in July that the new iPhones would not be available until, in the CFO’s own words, “a few weeks” after the usual end of September. launch window (allegedly due to production and supply problems caused by the global pandemic).

A note from the author: Special thanks to Scott Budman, Business and Technology Reporter for NBC Bay Area News, for submitting a copy of the Apple Event Invitation for use in this article (full disclosure … Budman is an acquaintance of this author).